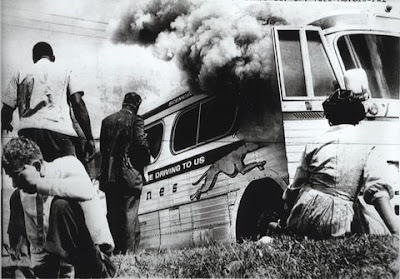 ON SATURDAY, Georgia Congressman John Lewis went nuclear on John McCain, releasing a statement that seemed to compare McCain to segregationist George Wallace. "George Wallace never threw a bomb," Lewis wrote. "He never fired a gun, but he created the climate and the conditions that encouraged vicious attacks against innocent Americans who only desired to exercise their constitutional rights." The civil rights icon continued, "Because of this atmosphere of hate, four little girls were killed one Sunday morning when a church was bombed in Birmingham, Alabama."
Lewis accused McCain and his running mate Sarah Palin of "sowing the seeds of hatred and division." He was referring to the angry tone of recent McCain rallies, where cries of "kill him" and "off with his head" have made many people anxious about the potential for violence against the Democratic nominee.

It's no wonder that the tone at McCain rallies remind Lewis of the bad old days. In recent months, conservatives have sounded increasingly retro with their attempts to paint Obama as a socialist or communist. In some ways, this accusation is typical far-right boilerplate. Obama certainly isn't the first Democrat running for president to be accused of communist sympathies. And as usual, the accusations are rarely linked to policy specifics. But the difference with Obama is that, in the eyes of the right, it's not just his political affiliation that implicates him as a socialist. It's his ethnic background.

The hysterical accusations of socialism from conservatives echo similar accusations leveled at black leaders in the past, as though the quest for racial parity were simply a left-wing plot. Obama may not actually be a socialist or communist, but his election would strike another powerful blow to the informal racial hierarchy that has existed in America since the 1960s, when it ceased being enforced by law. This hierarchy, which holds that whiteness is synonymous with American-ness, is one conservatives are now instinctively trying to preserve. Like black civil-rights activists of the 1960s, Obama symbolizes the destruction of a social order they see as fundamentally American, which is why terms like "socialism" are used to describe the threat.

Posted by Craig Hickman at 2:42 PM