Hickman's true first was Rituals: Poems and Prose, preceded by the poetry chapbook The Language of Mirrors. But it is his first book in more than a decade, and it is self-published – the press is named after the 25-acre farm where he and his partner raise livestock and run a bed and breakfast. The title is apt: the prose style is bracing, lyrical, preacherly, impressionistic, at times almost incantatory, rolling with the cadence of a compelling queer sermon. Hickman's memoir tells of his years-long search for his birth mother; what happens when they finally connect; how his strictly Seventh-Day Adventist birth mother Jennifer blames his homosexuality on how his laissez-faire Lutheran mother raised him; how his three biological sisters feel about him; and what happens when Hickman's adoptive family – and his Dutch lover Job – join his birth family for a reunion at the Georgia home where his grandmother – the matriarch who forced his birth mother to put him up for adoption – lives. There's a lot of adoption literature around, but few such memoirs match Fumbling Towards Divinity's flair for examining the madness and sadness and shame and satisfaction around digging up one's roots. Woven through the story of Hickman's search is a parallel story – his romance with lover Job is threatened by the Dutch man's family and a close friend, who are trying to subvert their relationship: lots of drama, detailed with heartfelt honesty in this exquisite book.

by Richard Labonte, Books to Watch Out For
Posted by Craig Hickman at 11:08 AM 1 comment: 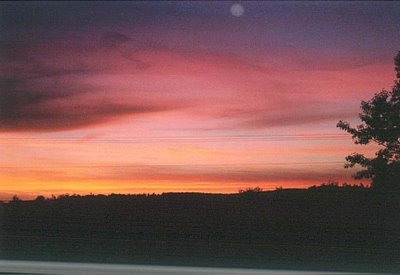 Sunset at Annabessacook Farm.
I have a husband, and I can still feel deeply lonely. Loneliness, I believe, is part of the human condition. Abject loneliness is a reminder that it's time to reconnect with the divine. When lonely, I don't need human attention or consolation, even though that's what my head or my groin might tell me. What I really need to do is to go out and stand with my back against a tree trunk, plant my bare feet in the earth, reach out my arms like the branches, close my eyes, breathe deeply and commune with all that is divine. Feel the powerful energy and support (and company) of the tree against my spine. Sit in the grass. Walk in the woods. Go to the river and listen to all the voices of divinity whisper from the water. Watch a squirrel or a bird do its thing. Hike up a hill and bask in the pure light. In nature, we are reminded that we are a part of everything--and everything is divine. So loneliness is the alarm clock that reminds me that it's time to wake up and get back to nature, to my spiritual and divine roots. 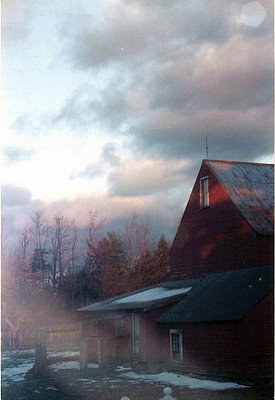 The barn in Maine's spellbinding light