Newspapers Across the Nation Endorse Barack 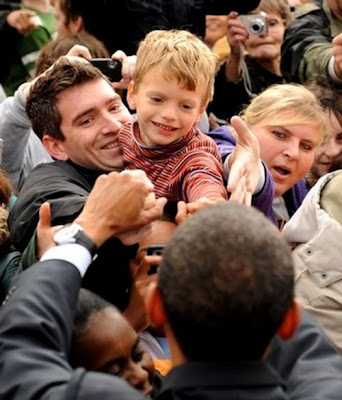 WITH THE ELECTION now just 23 days away, newspapers across the country have begun to announce their formal endorsements. Here are just a few of the papers in battleground states that have recently endorsed Barack Obama for President:

It's time for a change and that change cannot be delivered by the Republican candidate who has voiced no real split with the policies of the Bush years. The News-Sun Editorial Board is endorsing Sen. Barack Obama as the best hope for the nation to return to prosperity and to regain its standing in the world.

To be sure, the path to recovery won't be easy for the next president. There are ominous signs that the economy will continue to falter before confidence can be restored in the financial system. The leadership required to contain and reorder the economic mess created by eight years of heedless deregulation will have to be both inspired and inspiring. We believe the person best equipped by temperament and intellect to firmly grasp the reins of government and guide it safely forward in these uncertain times is Barack Obama.

Sen. McCain's campaign has been as disappointing as his move toward party orthodoxy. More than his opponent, he has run a relentless stream of commercials that have been discredited by nonpartisan fact-checkers. (Last week, all his ads were negative.) He has articulated no vision for the country other than to suggest that it should believe in him as an individual, as a war hero of independent judgment.

… [I]n a time of change, Sen. Obama is the more promising leader. With his agile mind, often pitch-perfect judgment and preternatural calm and self-confidence, he seems built for the job of sorting through this thing, if anybody can. The nation faces a choice that looks more and more like a choice between the future and the past. It has never been one to shrink from the future.

But this election is not just about the shortcomings of Mr. McCain and Ms. Palin and the failed legacy of a philosophy that they seek to perpetuate under the hastily erected banner of maverick. It is about the strengths of Barack Obama, whose rise to prominence is not a fluke or national infatuation but the consequence of his remarkable skills -- a keen intellect, noble intentions and the wit and grace to express them in ways that have inspired millions across the country. He has a rare gift exactly suited to the fearful times -- he knows the language of reassurance and hope.

Obama does not win this by default. He wins The Express-Times' endorsement because of his platform, because he has demonstrated a cool head in troubled times, because he inspires confidence and because he is conducting an above-board campaign. The next president isn't going to be able to deliver on much of anything that requires new spending. He will have to be a deft, recession-fighting strategist, to avoid being this century's Herbert Hoover. He must end the Iraq war. Obama has the firmer timeline and commitment on this.

America is at a pivotal point in its history — a difficult time that demands talented leadership to renew our nation's spirit and pull us together to meet the incredible challenges ahead. The right leader for the time is Barack Obama. The Wisconsin State Journal endorses the dynamic and youthful senator from Illinois for president. Far more than his opponent, Obama represents a new direction. He has shown he can inspire and lead people to action. And his relatively short time in corrupt, self-absorbed, terribly-failed Washington, D.C., may actually be a key strength. Obama is not stuck in the status quo of the Capitol crowd or its long-failed Congress.

Over the past nine months, Mr. Obama, the junior senator from Illinois, has emerged as the only truly transformative candidate in the race. In the crucible that is a presidential campaign, his intellect, his temperament and equanimity under pressure consistently have been impressive. He has surrounded himself with smart, capable advisers who have helped him refine thorough, nuanced policy positions. In a word, Mr. Obama has been presidential. Meanwhile, Mr. McCain, the senior senator from Arizona, became the incredible shrinking man. He shrank from his principled stands in favor of a humane immigration policy. He shrank from his universal condemnation of torture and his condemnation of the politics of smear.

Barack Obama will protect our country and its Constitution, which have suffered at the hands of the current administration, and he has chosen an excellent running mate in Delaware's veteran U.S. Sen. Joe Biden, who is ready to step in to serve if need be in the tradition of Harry Truman and Gerald R. Ford. Obama and Biden have both exhibited coolness, competence and confidence at every turn, reassuring the citizens of our great country that the promised change to come will be for the better. Their measured answers and well-thought-out responses to the difficult issues confronting the United States strike us as conveying the right tone and proper course for the four years ahead.

Posted by Craig Hickman at 2:55 PM

If Sen. Obama does well in the next debate-- and I think he will-- the election could be a landslide for the democrat.

call the roll!
thanks.
h&f