Daughter of Slave Votes for Obama 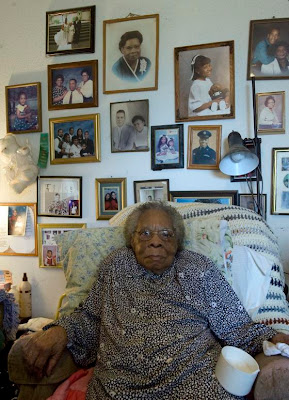 AMANDA JONES, 109, the daughter of a man born into slavery, has lived a life long enough to touch three centuries. And after voting consistently as a Democrat for 70 years, she has voted early for the country's first black presidential nominee.

The middle child of 13, Jones, who is African American, is part of a family that has lived in Republican-leaning Bastrop County for five generations. The family has remained a fixture in Cedar Creek and other parts of the county, even when its members had to eat at segregated barbecue dives and walk through the back door while white customers walked through the front, said Amanda Jones' 68-year-old daughter, Joyce Jones.

For at least a decade, Amanda Jones worked as a maid for $20 a month, Joyce Jones said. She was a housewife for 72 years and helped her now-deceased husband, C.L. Jones, manage a store.

Amanda Jones, a delicate, thin woman wearing golden-rimmed glasses, giggled as the family discussed this year's presidential election. She is too weak to go the polls, so two of her 10 children — Eloise Baker, 75, and Joyce Jones — helped her fill out a mail-in ballot for Barack Obama, Baker said. "I feel good about voting for him," Amanda Jones said.

Jones' father herded sheep as a slave until he was 12, according to the family, and once he was freed, he was a farmer who raised cows, hogs and turkeys on land he owned. Her mother was born right after the Emancipation Proclamation was signed, Joyce Jones said. The family owned more than 100 acres of land in Cedar Creek at one point, she said.

Amanda Jones' father urged her to exercise her right to vote, despite discriminatory practices at the polls and poll taxes meant to keep black and poor people from voting. Those practices were outlawed for federal elections with the 24th Amendment in 1964, but not for state and local races in Texas until 1966.

Amanda Jones says she cast her first presidential vote for Franklin Roosevelt, but she doesn't recall which of his four terms that was. When she did vote, she paid a poll tax, her daughters said. That she is able, for the first time, to vote for a black presidential nominee for free fills her with joy, Jones said.

I love this blog. Keep up the good work.

Amazing story. I'm so happy for her-- that she got to vote for Obama for president.