excerpt from Fumbling Toward Divinity continued from here
4
On April 20, 2001 at 4:55 a.m., the three men began the eight-hundred-mile drive to 1902 Greenhouse Drive in Roswell, Georgia. About forty minutes into the trip, just before they crossed into Illinois, curtains and curtains of thick, thick rain came crashing down. Craig could hardly see in front of him as the pewter torrents slammed against the windshield. Was this an omen? If so, what might it portend? “Honey, maybe you should pull over.”

Craig thought to take Job’s advice, but blinding weather was not going to keep him from moving closer to what he had been waiting his whole life to see. It would be different if he were hungry or had to relieve his bladder. In the absence of both, Craig couldn’t bring himself to stop moving forward, visibility be damned. “Don’t worry. I’ll manage.” 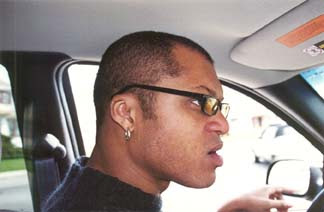 In the middle of the storm, which lasted through Indianapolis, Craig’s cell phone rang. It was James’ wife calling to tell them what James had known from the start: Jennifer was in Roswell. Sonja had booked herself a flight to Atlanta where she would arrive at 9:30 a.m. Saturday morning. Then, she called Jennifer and told her that she and James were taking a last-minute trip to the Bahamas and wouldn’t it be nice if they stopped in Atlanta for a visit on the way. Jennifer agreed to pick them up at the airport the next morning. Now, Craig knew it too: Jennifer was in Roswell.

The time was near.

The three men ate breakfast in Indiana, lunch in Kentucky, and other than snacking occasionally on the Crunch’n Munch, Tostitos, Goldfish, Oreos, Chessmen, and Lorna Doones they bought along the way, not one of them had an appetite for dinner. Somewhere in Tennessee, anxiety crept up on Craig like a wraith. As much as he wanted to drive the whole way, Craig ceded the wheel to Job. Craig stretched out in the backseat and wished for a master switch to turn off all the potential scenarios that looped nonstop in the frenzy inside his head. Somewhere in Tennessee, something else was sneaking up on James. His back-and-forth need for Copenhagen chewing tobacco (to raise the lows) and Budweiser (to steady the highs) increased as the distance to Roswell decreased. Somewhere in Tennessee, a snag tore through Job’s nerves. He fumbled in his pocket till he felt his lighter, dug it out and lit a Kamel Red from the pack he’d thrown on the dashboard when he took the wheel …

... They were driving through Chattanooga now. From the highway, James pointed out the apartment where he and Sonja lived back in 1992. As they passed by the long row of buildings, Craig’s cell phone rang. It was Sonja, as if she sensed exactly where they were. She called to ask how close they were and would it be possible for them to wait until her arrival the next morning before they went to meet Jennifer. She didn’t want, she said, to hear any anecdotes after the fact—she wanted (no, needed) to witness the meeting with her own eyes. Was this woman out of her mind? Who did she think she was? How on earth could she think that he would wait for her, a woman he’d never even met, before seeing the face of the woman who brought him here, the face he’d been dreaming about for as long as he could remember dreaming? Before he asked her these questions, or worse, put her in her place, Craig handed the phone to James, who talked to her for the next two hours, which included the remainder of the drive and the first minutes of the meeting she wanted to witness with her eyes.

When the three men finally arrived in Roswell, they stopped at a gas station to get directions. Back in Milwaukee, Craig had gotten the address from a reverse phone directory on the Internet using the number England had given to James. The friendly black man inside the gas station gave them good directions. With no trouble, they located the apartment compound at 1902 Greenhouse Drive. At the entrance to the grounds stood a sign emblazoned with the words: WELCOME HOME.

The time was near.

Posted by Craig Hickman at 1:05 PM