TO GET all caught up in awards hoopla. I’ve already begun, as you can see here and here. Unfortunately, or fortunately, depending how I spin it, awards season coincides with the beginning of the tennis season. I’m probably more obsessed with tennis than with anything else in life, but alas, it’s a healthy obsession that has led me to start my very own tennis blog recently. And tennis fanatics are more demanding than cinephiles. With so much to write about on both fronts, I won’t be sleeping much. It doesn’t help that the tennis season begins in Australia, so I’m going to throw my sleep patterns out of whack in just a few days. 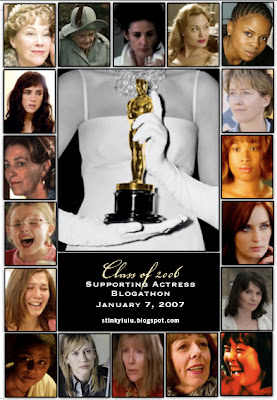 I’ll be taking part in Stinkylulu’s Supporting Actress Blogathan on January 7. At the crack of dawn, I’ll post my thoughts on this year’s most compelling performance by an actress in support of her star. I’ll give you one guess who I’ll be blogging about. But know knows, I might surprise with more than one entry. It should be fun to see who all the bloggers write about and which actresses get several nods.