Shortly after my husband Job served me breakfast in bed on my birthday, I wept for two hours. He’d left for work, and I was alone to reflect on this here life. I’m 39 now. That’s young. Unless, of course, you’re Black and gay. All of my closest Black gay friends, except for one, died in the mid-90s before they reached 39. The one who made it past that milestone, Boston playwright Thomas Grimes, died at 45 in 2003.

But I’m still here. On the morning of my birthday, these realities crashed over me like surf.

Outside, the first snowfall blanketed the Maine landscape, quiet as prayer. Inside, my two-hour tearfest proved to be a long overdue cleansing. I hadn’t cried for many months, and when the tears don’t flow, I get spiritually backed up.

I knew exactly why I was bawling, and with every heave, I had to count the many blessings in my life.

Later that evening, Job and I drove to Boston to celebrate my birthday with my dear sister-friend Gail over a luscious dinner at Café D in Jamaica Plain, where another friend, who happens to be Gail’s roommate, bartends. The braised pork shank I inhaled was so well-executed (I just had to suck on the bone), I swore the preparer had to be colored. But the demure queen, who hailed from San Francisco, was white as the snow that had fallen in Maine that morning. No matter. He swore he possessed soul anyway. He was right. I love it when someone smashes my stereotypes like the potatoes drenched in cabernet gravy hidden beneath the pork.

Saturday featured the event of my birthday weekend: the 20th Anniversary Jam(boree) of the Harvard Callbacks, a co-ed a capella singing group that I co-founded as a freshman, the year, according to the program, that the current group’s president was born (gasp!). I was unable to attend the 15th Anniversary Jam because Spirit compelled me to travel to Milwaukee to search for my birth relatives, an unbelievable journey that proved fruitful and resulted in this very blog. But only the death of a family member (or my own) would’ve kept me from physically attending this year’s celebration, and had a family member passed, I might’ve missed the funeral and observed their passing in my own private way. Blessedly, I didn’t have to make such a choice. 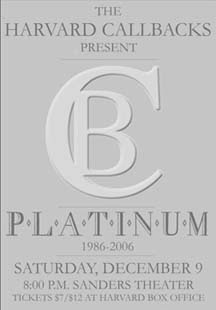 The concert poster. Notice the Callbacks insignia. My husband's last name is Blom and I often receive mail addressed to Craig Blom. Coincidence? I think not.

And, oh, what a celebration it was. I was so thankful to be there, so overwhelmed. Five generations of Callbacks performed. I felt honored when my alumni group chose me to solo one of my all-time favorites, “The Shadow of Your Smile”, which I had arranged bossa nova style during my tenure as the group’s music director.

At the concert’s end, more than 75 members of the great extended family were on the stage of Sanders Theater to perform our signature songs, “Old Irish Blessing” and Joe Cocker’s “The Letter.” Five members of my group brought their tots and babies onstage for the final songs. Myles, the three-year-old who belonged to a pair of Callbacks who fell in love and married after college, let out a timely yelp. In tune.

It was the perfect centerpiece to the perfect birthday weekend. And with my husband by my side, I couldn’t have been more grateful.

Posted by Craig Hickman at 6:02 PM

You're a musician too? That's great. I am working on a song this week that has to be good by Saturday.

The thing that makes it tricky is that my voice wants to go into the head sound but it sounds better with a chest sound but then I just want to belt it but it really sounds best with a relaxed sound-----argh.

What a wonderful energy you have.

I know the head voice/chest voice thing. I used to sing a lot of solos on my break and would switch back and forth between the to (I had no choice) but as I've aged, my register has deepened, so my head voice is almost non-existent. I found that out this past weekend and was unable to solo a song the group really wanted me to do.

Thanks for the shoutout!

My thing is to practise tons with the head voice and then do it in chest which isn't really chest because I tilt slightly/use twang/and not and I find now it's starting to come easier.

I've been so busy and neglected my vocal practise.

I want to have a strong head voice to it's handy for the music I want to sing too.

I am giving my first vocal workshop this Sunday.

What was the solo song you couldn't do last week?

The song I am working on for Saturday is "From a Distance" as sung by Bette Midler who has fantastic phrasing and is the queen of relaxed upper chest voice.