2
On August 18, 2001, at 4:52 p.m., James was the last passenger at Mitchell International Airport, gate D51, to deplane US Airways Flight 509 from Pittsburgh. Craig and his cousin, Bernadine (his mother’s older sister’s daughter), waited on tiptoe while Job stood nearby, pointing the video camera at the gate. Wearing a blue tie, a black leather jacket, black dress pants, and black pointed-toe loafers, James walked toward Craig. 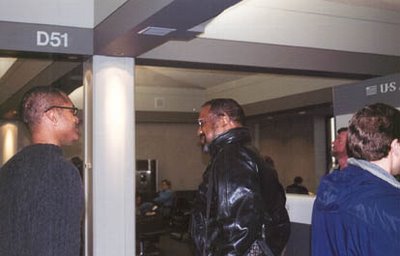 His head, close-cropped and balding, was egg-shaped, just like Craig’s. His breathing seemed labored. Like a robot’s, his bifocaled eyes darted side to side, up and down, deciphering, processing every visual stimulus in his surroundings. Craig recalled the image of James in the 1967 Oakwood College yearbook. Thirty-three years had little mercy on the man who walked right up to Craig and said, “Christian.” They hugged. “That’s the first thing I thought when I first saw you standing at the end of the corridor. You look like Christian. That’s my brother’s son. You look like Christian.” 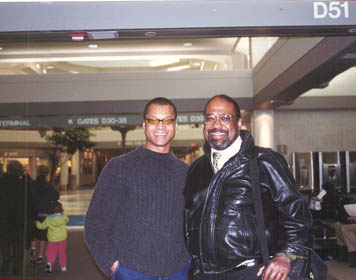 Craig introduced him to Bernadine and Job. On the way to the baggage claim, James asked, almost in a whisper, “Who is Job?”

“What kind of business?”

“The business of life.”

James collected his gray Samsonite suitcase and they left the airport and drove to the Hotel Wisconsin. Job and Craig had booked him a room down the hall from theirs.

“Seven eighteen,” said James, looking at the number on the door of his room. “Seven eighteen: that’s my brother, Josh. His birthday is July eighteenth.”

“Job’s is the sixteenth,” said Craig.
When they got inside, Uncle James opened one of his carry-on bags and took out a book of baby names, obituaries, photographs, yearbooks, and other family memorabilia, including James the Physician’s original business card, which pre-dated zip codes.

“Wow,” said Bernadine. “How did you keep that card in such good condition. And how did you find it so fast. You musta collected some pictures, found the card and said ‘I’m ready to go.’”
James cackled. “You can keep that.”

“Are you kidding me?” Craig stared at the card.

“Will you look at that.” Job stood over Craig’s shoulder, zooming in on the card with the video camera. 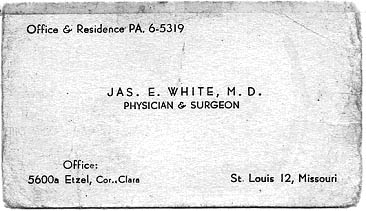 In the “Ocadian,” the Oakwood Academy (high school) newsletter, Craig saw pictures of Frank East that looked identical to pictures of himself as a youngster at Rufus King High. The newsletter also included Frank’s birthday and middle name. Now Craig could find him too.

“Here is a picture of your grandparents at their fiftieth wedding anniversary,” James handed Craig two photographs, “and them again when they were first married in forty-six. December seventh, Pearl Harbor Day.”

“Oh, my word, that’s the day between my mother’s and my birthday.” Craig studied the first one. “Bernadine, come take a look at this.” Bernadine rose from the bed, came near, and looked. Craig pointed to the image of England. “Doesn’t she look like Grandma Magnolia?”

“Mercy.” Bernadine eyed the image with raised eyebrows. “She does look like Grandma Maggie.”
“Who’s she?” James looked at Bernadine.

“She’s our grandmother, my mother’s mother and Aunt Mary’s mother. She passed two years ago now I think it was.”

“And look on the picture when they got married.” Craig passed the picture to Bernadine. “My grandfather looks like my father, same hairstyle and everything. My parents were married in forty-six, too. June twenty-third.”

They talked about more coincidences between all their families, which, by now, didn’t seem to be coincidences at all. Their families were closely woven textiles whose lattices—metaphysical, ineffable, undeniably real—astounded the mind.

The Weavers’ work was of the highest artistic expression. “Let’s take all this stuff with us and go see my parents. They’re simply gonna die.”
Posted by Craig Hickman at 5:03 PM