Here Are the Christians! 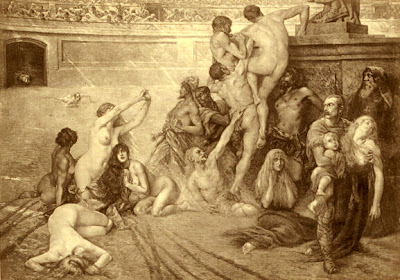 MY RECENT column “Where Are the Christians?” drew a bundle of answers in emails from Truthout readers. That piece was about the bigoted remarks of Rep. Virgil Goode (R-Va.) attacking newly-elected Congressman Keith Ellis, a Muslim, for taking his unofficial oath of office with his hand on the Quran - and mindlessly predicting that this would somehow lead to a vast increase in illegal Muslim immigration (unless, of course, we close our borders).

It might be instructive to quote a couple of the emails I received.

Reverend Joy A. Bergfalk, of Life Listening Resources at Labyrinth House in Rochester, N.Y., wrote, “We progressives ... do not have the finances of the Religious Right. We do not have Big Business and Sun Myung Moon to back us, and the oil industry is certainly not with us. That kind of money goes to those who will let the corporate world take over America. Plus, we tend to try to use our finances to change the world by helping it.”

In answer to my “Where Are the Christians?” question, Rev. Bergfalk wrote, “We are in almost all of the places where peacemaking is going on. We are at marches and rallies. We are at our computers writing responses, letters to Congress and whomever we can. I have written a response to Goode’s statements. There was no way to email it to him from outside of Virginia, so I have prepared a letter to be sent to each of his five offices.”

She added, “And we are speaking out in churches and from the pulpits. I think my parishioners now realize that Muslims and Christians worship the same God by different names.”

And she closed with, “We may not be as obnoxious and flamboyant as the Religious Right, but we are here and active. Maybe if people would quit leaving the church in reaction to right wingers, the church would be a stronger force for change in our world.”

Another reader, Rev. Jim Altman, pastor of Cadott, Stanley, and Thorp United Methodist Churches in Stanley, Wis., called my article “a cheap shot.” He explained, “There are credible progressive Christian voices out there who are rarely reported by even the progressive media. My response to Mr. Fisher’s question is that nobody’s asking us. I, for one, would love to give a Christian’s response to Rep. Virgil Goode’s outrageous rant against his fellow congressman Keith Ellison, but media outlets seem only interested in conflating Christianity with the religion of Falwell and Robertson. The majority of Christians in this country do not subscribe to ‘The Old-Time Gospel Hour’ or ‘The 700 Club,’ and do not worship in ‘mega-churches,’ yet when journalists look for the American ‘Christian’ response we get Jerry, Pat, or some blow-dried dandy from the Church of What’s Trendy. Most of the Christians I know would support Rep. Ellison’s freedom of religion and more than a few would argue that the world still has much good to learn from Islam, but in the theater of journalism, inflammation trumps reason and cartoon trumps reality.”

Well, that is exactly the point I was trying to make. I wrote, “You might not be aware of it, but there is a robust community of progressive Christians in America, struggling to get its voice heard. That’s a tough task when you don’t have the deep pockets and the cynical White House connections to effectively drown out dissent. Or change the subject. It’s a lot easier for this wedge constituency to get people worried that if same-sex unions become legal, they’ll all be forced to marry a gay or a lesbian than it is to speak out for the homeless, the poor, those who have no health care, and for religious tolerance to find common ground.”

The Christian Alliance’s reader response was plentiful and passionate.

One reader wrote, “The attempt to conflate Islamophobia with immigration reform is laughable, except I can only imagine that we’ll only see more of it from the Right. Once they come up with an intellectually unfounded conflation of issues, they tend to use it relentlessly until it takes hold in the minds of enough people for it to enter the cultural discourse (see their attempts to claim that all gays are pedophiles).”

Another wrote, “No matter what nonsense Congressman Virgil Goode spouts, he’ll continue to be reelected by his constituency of good-ole-boys from Franklin County, Virginia. I live in a Congressional district adjacent to Goode’s so I know whereof I speak. Please, please let’s all allow good ole Virge to keep on writing and speaking as he pleases. The more Rep. Goode writes and says to expose his own narrow-minded ignorance, the more progressives will feel emboldened to vote against his willful stupidity.”

And yet another said, “It is truly sad that the people of Goode’s district and believe me, there are many, many good people in that district, aren’t standing up and demanding either a retraction of his remarks or his removal from office ... The former bastion of the Confederacy lingers with those like Goode who have no respect or tolerance for anyone different from them.”

Well, I’m afraid these are voices in the wilderness. The web sites and broadcasts run by “values” groups like Focus on the Family, the 700 Club, and the Family Research Council, attract many more people and, as one of my readers rightly points out, are routinely turned to by journalists in need of a “religious source.”

It is worth noting that Tony Perkins’s Family Research Council website claims it has “led the way in defending religious freedom in the public square,” yet has been silent on the Goode affair. The websites of the other major right-wing “values” groups have either ignored the issue, or presented it as “straight news,” but using code-words such as references to Goode’s opposition from the Anti-Defamation League (ADL) or the Council on American Islamic Relations (CAIR). The Foundation for Moral Law, led by dismissed Alabama Supreme Court Judge Roy Moore, inveighed that Ellis should not be allowed to take his congressional seat at all.

True, there are some counter-balances with national reputations, like Jim Wallis of Sojourners, the Interfaith Council, and the National Council of Churches, but they attract nothing like the media coverage given to the Religious Right.

All of which suggests that if religious extremism doesn’t really represent the views of most Christians, the more progressive forces within Christianity - and Judaism and Islam - need to become as unified and aggressive and determined as those who have sadly become the public faces of these great faiths by hijacking. They need to do more to organize nationally, to raise substantial funds, and to be much more proactively media savvy.

That’s not an easy task and it won’t happen quickly. But it’s the only way to at least level the playing field of religious discourse.

William Fisher has managed economic development programs in the Middle East and in many other parts of the world for the US State Department and USAID for the past thirty years. He began his work life as a journalist for newspapers and for the Associated Press in Florida. Go to The World According to Bill Fisher for more.
Source

Posted by Craig Hickman at 3:37 PM