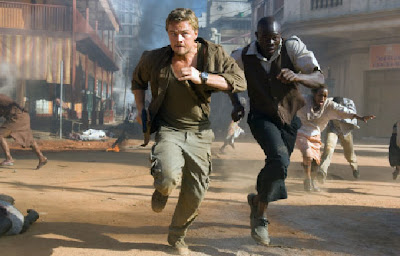 Blood Diamond couldn’t decide if it wanted to be an action flick or a piece of agitprop theater on celluloid. Think Raiders of the Lost Ark meets Hotel Rwanda. While watching, I vacillated between wanting to see a young Harrison Ford play the Leonardo DiCaprio role and needing to hear some overwrought speech from somebody—anybody—in the diamond industry who had a crisis of conscience pushing conflict diamonds. Neither happened. Instead, director/producer Edward Zwick (Glory, Courage Under Fire, The Last Samurai) has auteured an uneven, unfocused mess.

Jennifer Connelly’s unconvincing journalist Maddy Bowen (what’s in that name?), who’ll do anything short of sleeping with the devil to get her story, is apparently supposed to represent the film’s conscience, but her performance is so woeful, I couldn’t take seriously her musings on morality. It takes more than a cat’s gleaming eyes to round out a character. Though I didn’t see A Beautiful Mind (I can’t stomach Russell Crow), I still won’t believe Connelly is an Oscar-winning actress.

DiCaprio is believable as Danny Archer, a South African mercenary-cum-diamond smuggler who Deep Throats to Maddy on the amoral diamond industry, but only so he can secure her help in getting closer to the rare and very large pink diamond he so desperately wants to

recover in order to buy is ticket out of Africa. It’s been a while since DiCaprio has been this convincing (I haven’t seen The Departed), but the limits of the character as written by Charles Leavitt (K-PAX) didn’t allow DiCaprio to affect me emotionally.

Djimon Hounsou, who plays Solomon Vandy, the fisherman whose life was spared in a village raid so that he could slave for diamonds, provides the film’s emotional center. Solomon wants to recover the rare diamond he buried just before his diamond field was attacked so that he can leverage it to get back his family, in particular his son who was kidnapped and brainwashed into becoming one of the hundreds of thousands of pre-pubescent assassins in Sierra Leone’s mid-90s civil war. He creates Solomon from the inside out, and although his character is rather one-dimensional, Hounsou is able to extract blood from a rock. 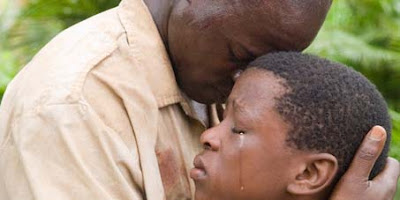 Zwick’s heavy-handed direction misses the mark. There’s too much gratuitous violence and a barrage of images of Africans killing and maiming each other in the quest to control the diamond trade. Maddy declares somewhere in the film that not all Africans kill other Africans for a living, though you’d hardly know it from this picture. I nearly lost it when watching extended footage of a group of children celebrating their killing spree by smoking pot, dancing to hip hop, and bedding prostitutes. I know, I know. It’s all true. But so many images of so many savage Africans becomes so redundant, I began to question Zwick’s agenda. I kept waiting for the development of some other part of the storyline.

And I simply could not believe all the times Danny and Solomon are able to escape gunfire unscathed. Everybody wants the pink diamond. Onscreen, enough magazines are emptied to exterminate an entire nation. Yet, neither of the main characters takes a bullet until the third act. Yeah. Right.

The ending is atrocious. Perhaps it was tacked on to respond to test audience critiques or something but it made absolutely no sense and came completely out of nowhere. I mean Hollywood. Zwick had a chance to end the film with the triumph of the human spirit. He had DiCaprio high on a mountain, close to heaven, facing a great choice and an opportunity to atone for his actions. But that woulda been too much like right.

Still, I found myself not missing my diamond wedding and anniversary rings that I’d forgotten to put back on after giving a massage earlier in the day. Found myself wondering if any of the rocks in my rings came from bloodshed. If I’d slip my finger through them once again when I got home. The film served a purpose after all.

Posted by Craig Hickman at 2:04 PM