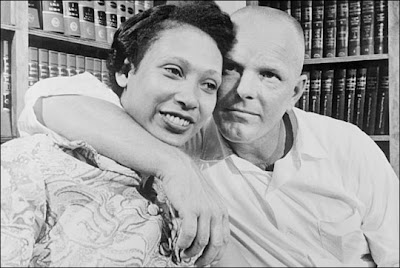 Peggy Fortune said Loving, 68, died Friday at her home in rural Milford. She did not disclose the cause of death.

"I want (people) to remember her as being strong and brave yet humble — and believed in love," Fortune told The Associated Press.

Loving and her white husband, Richard, changed history in 1967 when the U.S. Supreme Court upheld their right to marry. The ruling struck down laws banning racially mixed marriages in at least 17 states.

"There can be no doubt that restricting the freedom to marry solely because of racial classifications violates the central meaning of the equal protection clause," the court ruled in a unanimous decision.

Her husband died in 1975. Shy and soft-spoken, Loving shunned publicity and in a rare interview with The Associated Press last June, insisted she never wanted to be a hero — just a bride.

Mildred Jeter was 11 when she and 17-year-old Richard began courting, according to Phyl Newbeck, a Vermont author who detailed the case in the 2004 book, "Virginia Hasn't Always Been for Lovers."

She became pregnant a few years later, she and Loving got married in Washington in 1958, when she was 18. Mildred told the AP she didn't realize it was illegal.

"I think my husband knew," Mildred said. "I think he thought (if) we were married, they couldn't bother us."

But they were arrested a few weeks after they returned to Central Point, their hometown in rural Caroline County north of Richmond. They pleaded guilty to charges of "cohabiting as man and wife, against the peace and dignity of the Commonwealth," according to their indictments.

They avoided jail time by agreeing to leave Virginia — the only home they'd known — for 25 years. They moved to Washington for several years, then launched a legal challenge by writing to Attorney General Robert F. Kennedy, who referred the case to the American Civil Liberties Union.

Read the Rest of the AP Article

Prepared for Delivery on June 12, 2007,
The 40th Anniversary of the Loving vs. Virginia Announcement

When my late husband, Richard, and I got married in Washington, DC in 1958, it wasn’t to make a political statement or start a fight. We were in love, and we wanted to be married.

We didn’t get married in Washington because we wanted to marry there. We did it there because the government wouldn’t allow us to marry back home in Virginia where we grew up, where we met, where we fell in love, and where we wanted to be together and build our family. You see, I am a woman of color and Richard was white, and at that time people believed it was okay to keep us from marrying because of their ideas of who should marry whom.

When Richard and I came back to our home in Virginia, happily married, we had no intention of battling over the law. We made a commitment to each other in our love and lives, and now had the legal commitment, called marriage, to match. Isn’t that what marriage is?

Not long after our wedding, we were awakened in the middle of the night in our own bedroom by deputy sheriffs and actually arrested for the “crime” of marrying the wrong kind of person. Our marriage certificate was hanging on the wall above the bed. The state prosecuted Richard and me, and after we were found guilty, the judge declared: “Almighty God created the races white, black, yellow, malay and red, and he placed them on separate continents. And but for the interference with his arrangement there would be no cause for such marriages. The fact that he separated the races shows that he did not intend for the races to mix.” He sentenced us to a year in prison, but offered to suspend the sentence if we left our home in Virginia for 25 years exile.

We left, and got a lawyer. Richard and I had to fight, but still were not fighting for a cause. We were fighting for our love.

Though it turned out we had to fight, happily Richard and I didn’t have to fight alone. Thanks to groups like the ACLU and the NAACP Legal Defense & Education Fund, and so many good people around the country willing to speak up, we took our case for the freedom to marry all the way to the U.S. Supreme Court. And on June 12, 1967, the Supreme Court ruled unanimously that, “The freedom to marry has long been recognized as one of the vital personal rights essential to the orderly pursuit of happiness by free men,” a “basic civil right.”

My generation was bitterly divided over something that should have been so clear and right. The majority believed that what the judge said, that it was God’s plan to keep people apart, and that government should discriminate against people in love. But I have lived long enough now to see big changes. The older generation’s fears and prejudices have given way, and today’s young people realize that if someone loves someone they have a right to marry.

Surrounded as I am now by wonderful children and grandchildren, not a day goes by that I don’t think of Richard and our love, our right to marry, and how much it meant to me to have that freedom to marry the person precious to me, even if others thought he was the “wrong kind of person” for me to marry. I believe all Americans, no matter their race, no matter their sex, no matter their sexual orientation, should have that same freedom to marry. Government has no business imposing some people’s religious beliefs over others. Especially if it denies people’s civil rights.

I am still not a political person, but I am proud that Richard’s and my name is on a court case that can help reinforce the love, the commitment, the fairness, and the family that so many people, black or white, young or old, gay or straight seek in life. I support the freedom to marry for all. That’s what Loving, and loving, are all about.

Posted by Craig Hickman at 8:49 PM

It's hard to believe that this case was not settled until 1967! On June 12, our first son's birthday, his grandmother's birthday for 65 yrs (it was discovered her birth was never recorded on the public records, but that's another story). How ignorant and hateful the Judge was to actually believe that God would create a world that would intentionally divide people! Had he not heard of the continental drift?
I especially like the fact, Mrs Loving credited her case as being"God's work"! That speaks to her being a humble,balanced women.
Good story to read over coffee and oatmeal. Thanks Craig :-)

This article hit me to the core.

Just another coincidence? or is it God's way of letting us know that he is there? I choose the latter, especially with respect to your coincidence