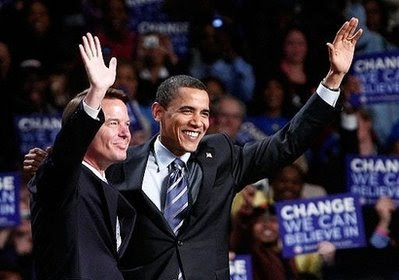 PERFECT timing. A few weeks ago, I predicted on Jack and Jill Politics that the day after Obama got trounced in West Virginia by 30 or 40 points, John Edwards would endorse Obama at a big event and take back the media narrative.

I like being right when the result is so good.

Many Obama supporters were complaining that Obama wasn't doing a good enough job of controlling the media narrative of this campaign. That he was giving she who shall not be named too much space to do her dirty work.

I countered that Obama was one of the shrewdest politicians I've ever seen and the timing of the Edwards endorsement would prove it.

Well, here we are. Just as she who shall not be named was set to have all her evening news interviews aired last night, Edwards flew into Grand Rapids, Michigan, and Obama presented him to the crowd as a surprise.

After this, Obama gave a rousing and forceful address. More forceful than he's been all campaign. How brilliant that this event would happen in the second largest city in Michigan in the conservative western part of the state, a state where Obama had not been able to campaign in the primary.

The best part of all this: the idiotic talking heads had to stop peddling their propaganda that Obama has a problem with "hard-working Americans, white Americans," as she who shall not be named presented it. Obama now has Mr. Populist himself in his corner. The same man who took 7% of the vote in the West Virginia primary.

Posted by Craig Hickman at 7:51 AM