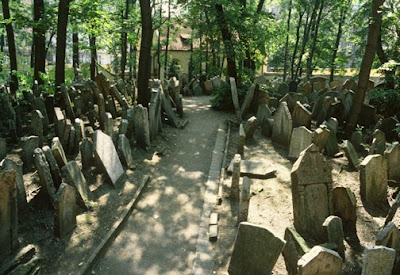 The Jewish Cemetery in Prague
TODAY is the day that we remember the Holocaust. Barack Obama released this statement:

Today, we remember the light that was brought into the world by each of the six million Jews who lost their lives in the Holocaust, as well as the terrible darkness of the Nazi genocide. We also renew our commitment to combat the scourge of anti-Semitism everywhere, and to stand up against extremism and prejudice of any form.

Let us resolve to confront genocide and work to prevent mass atrocities, beginning with greater action to stop the killing in Darfur. And let us stand with the Jewish State of Israel, a strong and resilient democracy that emerged out of the shadow of the Holocaust, but which still has enemies that threaten its destruction.

The years may pass, but our memory of the Holocaust will never fade. Instead, it guides our commitment to honor those who were lost, recall the crimes that were committed, and work for a more just, peaceful, and hopeful future for all people.

Posted by Craig Hickman at 5:13 PM