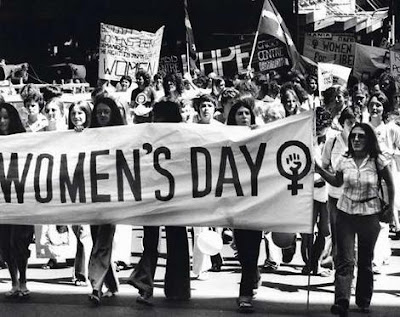 NOW for something more positive and more in line with Barack's message, I must post this marvelous call to action which references the title of the seminal choreopoem by Ntozake Shange For Colored Girls Who Have Considered Suicide When the Rainbow Is Enuf. Here's the stirring introduction:

I write this as a aging Black Man who is sympathetic to your cause. I know that I have not walked a mile in your heels, but believe me – I see and feel your pain.

This election cycle we have seen a marvelous evolution come to fruition in America. For the first time in our history we have seen a truly viable woman candidate run for the highest office in the land. One who presumably was the inevitable winner, with every condition favoring her victory. This after a national history of women’s legal and social submission to a patriarchal system, with its’ legacy of social and physical brutality and economic discrimination. A sister had a real chance to lead us all. How proud you must feel! How empowered! To have one of you stand tall in the halls of power and privilege would no doubt be a beacon for our daughters and proof of the ability and competence of all women. So I understand the disappointment and heartache that her apparent defeat causes among those who have invested so much emotional capital into her effort. The loss of heart, the sense of worthless struggle – the feeling almost of despair that follows on the heels of once again coming up short after a magnificent effort.

But I encourage you to rise above the emotional myopia caused by the personal pain of disappointment, to take another look at this country we love. The evolution IS on going. For the winner of this competition was not one of the many White Males who crossed the starting line – and who tradition and history would expect to cross the finish line first. No, this time the winner was a person of color, one of those who also inherits an historical legacy of exclusion and discrimination to match your own. For the first time, in the history of our country, one of the inheritors of our history of exclusion and discrimination has fully overcome our national past to stand before all of our fellow citizens as an equal, to be judged for who - not what he is. In truth his victory is your victory too.

This is lovely. American women are smart. They will see this, sweep aside the fleeting sorrow, and get back to what the issues really are for them.