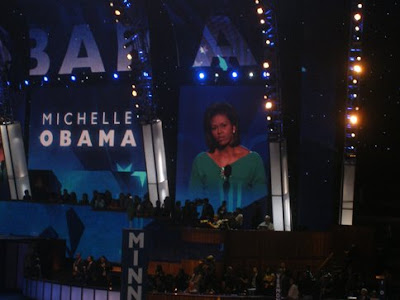 THERE ARE TIMES when you just can't put your thoughts and feelings into words because you have been moved too far beyond them.

Last night was one of those times. Michelle Obama (re)introduced herself and her family to the American people in a presentation that made me weep.

Dressed in a stunning green dress, she radiated warmth and poise and grace as she paid tribute to her late father, her own motherhood, and told the nation her husband would renew America's promise and restore her position in the world.

Ignore the cynics on the cable news shows passing themselves off as journalists. Michelle was received with wild enthusiasm. The atmosphere was otherworldly. People drank in her every word like ambrosia. By the time she finished, there was nary a dry eye in the house.

I miss my father. A Tuskegee Airman, a true patriot, as proud of his service to our nation as he was of his family, he passed away a year-and-a-half ago after a long battle with cancer. He always wanted me to get involved in law and politics. Told me that America would never fulfill its promise until the racial divide closed. Thought that when an African American finally ascended to the presidency, the wounds could really begin to heal. But he knew he'd never see it. Never thought his children would see it. Ironically, he passed away in the same month Barack Obama announced his candidacy.

Life had other plans for me. I was called to a different career. But my active support for the leader of a new generation and my entire campaign to get to Denver to nominate this historic candidate is my tribute to my father.

Just as Michelle's father was looking down on her beautiful family, including her brother who shares my name, her mother and daughters, I could feel Daddy's presence in the incredible energy inside the Pepsi Center.

He was also a lover of the Kennedy clan. So to see Ted Kennedy, my senator for the 16 years I lived in Boston, come out and give what will likely be his last Democratic National Convention address, broke the dam wide open. By the time Michelle spoke, I was the grand rapids.

I called my mother in Milwaukee. My father's rock for 61 years, she's still reeling from his absence. But she has relied on her strength and deep and abiding faith to keep on going. We shared a good cry. She never thought she'd get to see a moment like this either.

I cried so much yesterday. I still choke up. I don't want to put this in terms of Black and White, but I just don't think White America understands just how profound Michelle Obama was last night. This visibly Black, unmistakeably African-American woman. The descendents of those who came through the bottom of slave ships.

The bio video of her, which was a testament to her father.

She told the world about this humble Black man. Who graduated from high school. Who was disabled.

But, shattered every damn stereotype ever written about Black men.

In lifting him up, she lifted up all the rest of the Black men, who throughout the history of this country, have never gotten any credit for being the antithesis of the stereotype.

I stopped crying with Craig's introduction, but beamed too, watching him. This tall, intelligent Black man, introducing his sister, who he obviously adores.

And then Michelle began, and they panned to her mother. I know that face. I know that woman. Hers was the face of the ancestors, and the look on it- the pride.The look on Marian Robinson's face pierced me to my soul . Only way I can describe it. Every contour of it reached back generations. I was lost in my tears.

I hope you post it on the Kennebec Journal blog as well.

Thanks for the update, Craig. The thing that struck me was what you said...that everyone was listening intently. I saw even white women crying. It was a healing moment, and the MSM was right there, but missed it. May they go the way of the dinosaurs.

Were you all as crazy on the floor for The Cowboy Governor as I was watching him?

It's too bad the cable networks outside of C-Span didn't televise the Cowboy Governor's speech.

He started slow and then ran away with it. It was like being in a saloon and having some drunken, swashbuckling cowboy stand up and tell the folks why they couldn't vote for John McCain.

It was the answer to the "Where's the beef?" question the cynics had been asking for all week.

He was on my shortlist for VP.