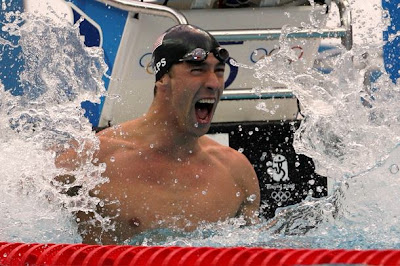 BEIJING (AP) - Michael Phelps swam into Olympic history with a magnificent finish Saturday, his arms soaring through the water one last time to get a hand on the wall and win his seventh gold medal of the Beijing Games.

Phelps beat Milorad Cavic of Serbia in the 100-meter butterfly by a hundredth of a second, setting an Olympic record in 50.58 seconds but snapping his streak of setting world records in each of his previous six gold-medal performances.

The 23-year-old American has now pulled even with the greatest of Olympic records, matching Mark Spitz's seven gold medals from the 1972 Munich Games.
Call this one the Great Haul of China - and it's not done yet.

Phelps will return on Sunday to swim in his final event of the Beijing Games, taking the butterfly leg of the 4x100 medley relay. The Americans will be heavily favored to give him his eighth gold, leaving Spitz behind.