Greatest Olympian of All Time 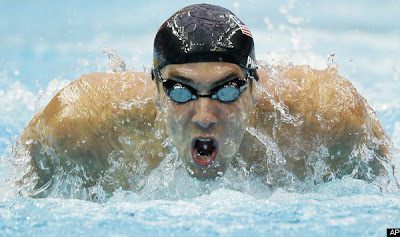 BEIJING (AP) — Michael Phelps has become the winningest Olympic athlete ever, earning his fourth gold medal of the Beijing Games with a world record in the 200-meter butterfly. The American touched in 1 minute, 52.03 seconds, breaking his old mark of 1:52.09 set at last year's world championships in Australia.

It was Phelps' 10th career gold medal, breaking a tie with Mark Spitz, Carl Lewis and two others for most golds. He is 4-for-4 so far, setting world records in each of his events.

Posted by Craig Hickman at 1:11 AM

We have been enjoying the Olympics when we can get clear of "medical realities".
Kevin Eastler,31 yrs old, son of Dr Tom Eastler, Farmington, Me,(an old friend and former professor)is on the American race team.Keep your eye out for the teams events (under athletics)
on the 16th: the twenty km walk @ nine am and on the 22nd the fifty km walk begins 7:30am on Fri. not as exciting as the swimming but exciting for Me! This is Kevin's second trip to the Olympics.