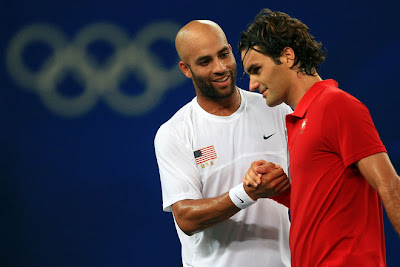 With the sort of lackluster performance once unthinkable for Federer, he was eliminated in the quarterfinals 6-4, 7-6 (2).

The upset was a stunner in that Blake had won only a single set in their previous eight matches. But the top-seeded Federer is battling a yearlong slump that has left him stalled at 12 major titles, two shy of Pete Sampras’ record.

His Wimbledon reign ended last month, and he came to Beijing knowing he would lose the No. 1 ranking after 4 1/2 years to Rafael Nadal next week.

Federer’s latest defeat means no rematch in Sunday’s final against Nadal, who won in epic fashion when they met for the Wimbledon title.

Federer had been seeking his first Olympic medal after losing in the singles semifinals in Sydney and in the second round in Athens. He was scheduled to play a quarterfinal doubles match later Thursday with Swiss partner Stanislas Wawrinka.

The upset was sweet for the No. 8-seeded Blake, a first-time Olympian at 28 and the lone U.S. male to survive the first round of singles.

Read the rest of the AP report... 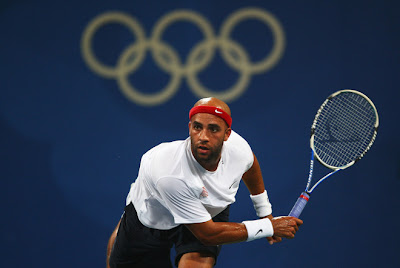 What a great result for Blake, who has struggled with confidence all year. What a time, what a place to get your first victory in umpteen tries over Federer.

2008 is looking very good for the accomplishments of Black men on the world stage. In tennis in particular, this is the third major event where a Black man has made the final four. France's Jo-Wilfried Tsonga and Gael Monfils made the semifinals of the Australian Open and Roland Garros respectively, while Tsonga went one step further and made the finals where he fell to Novak Djokovic of Serbia. Monfils lost to Federer in Paris.

Go, James. One more victory will guarantee you an Olympic medal.