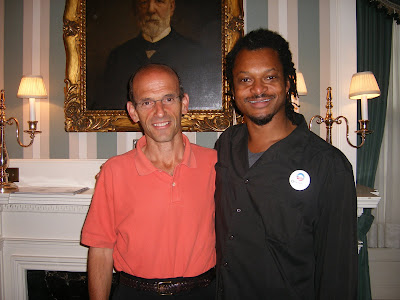 Gov. John Baldacci and yours truly

I leave for Denver Saturday evening and I can hardly stop shaking. You'd think I was about to perform naked in front of 10,000 people the way my body has tensed up.

I am about to attend my first Democratic National Convention where the first African-American will accept the nomination for president of the United States on the 45th anniversary of Martin Luther King Jr.'s "I Have A Dream" address.

But the tightness in my back, my trembling hands and a string of sleepless nights tells me I'm a nervous wreck. And if my gut is right, I have every reason to be. I don't expect the nomination of Barack Obama on the convention floor to go smoothly. I don't expect the nomination of his vice presidential pick to go smoothly. I may have misjudged this -- but I do trust my gut. This time, I hope it's wrong.

On Thursday night, I went to the Blaine House where Gov. John Baldacci and the first lady hosted a reception for the Maine delegation to the convention. Around a table of delicious garlic, mustard and maple meatballs, tuna salad finger sandwiches, deviled eggs, fresh fruit, cookies and beverages, we asked our questions, stated our concerns and got great advice for how to navigate through the busiest days of our lives.

At least that's what they look like they're going to be.

I've never received invitations to so many receptions and caucuses and rallies and celebrations and parties. I've heard from African-American groups, Lesbian-Gay-Bisexual-Transgender groups, African-American Lesbian-Gay-Bisexual-Transgender groups. One of the delegates advised us to print out the 31 pages of events, take a highlight pen and pore over all the activities on the way to Denver because once it all gets moving, we'll have no chance to decide what to do.

Sounds like an express train to history with no stops for four days.

I'm not terribly organized, despite being an office manager in a former life, but I intend to take her advice.

We also found out that the Hillary Clinton campaign has a number of "whips" who will advise the Clinton delegation after daily strategy meetings.

What have I gotten myself into?

But we're talking about history here. So I motivated myself to get over myself and take the opportunity to participate in this saga up close and personal. I came out of my political slumber, caucused in a snowstorm for Barack Obama and got elected as an Obama delegate to the state convention.

Even though few delegates in Maine knew who I was before the state convention began, I campaigned my heart out before my district voted, presenting performance art as political campaign -- and got really lucky.

Despite my anxiety, I intend to have a ball. I thrive in big crowds. I love meeting new people. Participating in the political process. And all the delegates who've done this before have told me I will have the time of my life. Without sleep.

I'm looking forward to it.

Crossposted to The Kennebec Journal

Posted by Craig Hickman at 1:55 PM

GReat article! Can't wait to read the next chapter of your historical experience!

Besides being extremely busy, have lots of fun and let yourself be inspired even more than you already are.

This was an excellent article. You know how much I want your instincts to be wrong. But, I'm ready for anything, craig. You're on point, and I hope you have a great time in Denver. You know, you should try and find Al Giordano and his group of Field Hands that are in Denver. And, check in with the JJP family too.

If you get to radio row, look up WVON-AM. Good people there.

I'm going to try to meet as many online analysts as I can.

Reading a great follow-up to the nyt best seller "Dumbing Us Down", written in the 80's by John Gatto.
The deliberate analysis is both provocative and disconcerting. As an Educator, the down has reached a new low


This would have been the year to go to the National Convention.

Get some interesting observations, from your unique point, to view!