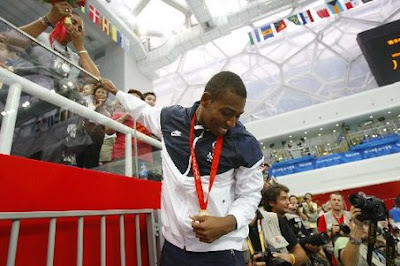 I MISSED this historic event last night, but when I read the article this morning, I immediately broke out into tears.

BEIJING - When Cullen Jones powered through the water Sunday night, chasing history, the charismatic kid who learned to swim in Newark could hear the roar from a half a world away. Amid the deafening cheers from the thousands squeezed into the National Aquatics Center, Jones felt the support from the scores of people that he touched along an incredible and unlikely path that began in inner city pools and led him here to the world's biggest stage. An ambassador for African-American swimmers, Jones wanted to shatter stereotypes one lap at a time, eager to spread his message that, yeah, black kids can swim, too.

He also wanted to help out a buddy on his own personal mission.

Jones accomplished both by helping the 4X100 freestyle relay team win the gold medal in a comeback for the ages. In a race soaked with drama and subplots, the Americans shattered the world record they had set just hours earlier in the prelims, blistering through the water in 3 minutes, 8.24 seconds. 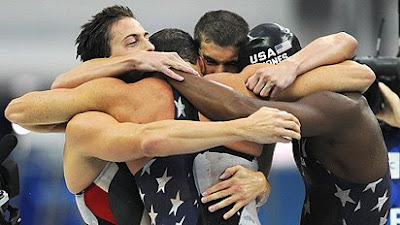 Trailing after three legs, anchor Jason Lezak erased a huge gap to overtake and out-touch French world record holder Alain Bernard to set off a wild celebration. A few days after Bernard declared his team would "smash" the Americans in the finals, the U.S. team authored a stunning chapter in these Olympics.

"We beat a team in most people's mind was not beatable," said U.S. coach Eddie Reese. "It was amazing. (Lezak's leg) had to be the best ever and it was the best ever. That's the kind of anchor you dream of."

Jones became the second African-American swimmer to win a gold medal as the team kept Michael Phelps' quest for an unprecedented eight golds alive. But it was Lezak's fastest split in history at 46.06 seconds and mad dash in the final frenzied moments when he hunted down Bernard after being behind by more than eight-tenths of a second that had everyone buzzing. 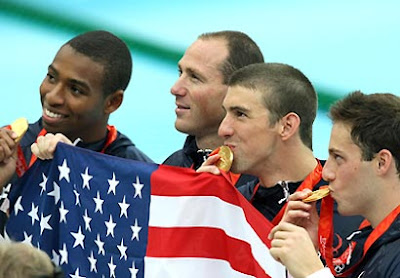 Posted by Craig Hickman at 9:07 AM

I missed it as well. I am SO proud of him. It CAN be done. We CAN do/be anything we want.