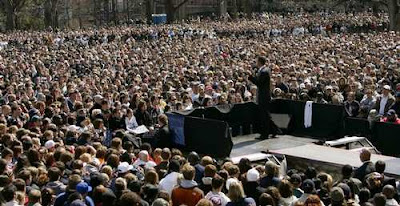 SHIVERING in blankets of Penn State's colors, some 20,000 people filled a campus lawn Sunday to hear Barack Obama say he can win the Democratic nomination even if rival Hillary Rodham Clinton stays in the race.

Supporters stood in long lines for hours to hear Obama ahead of the April 22 Pennsylvania primary.

On a sunny day with temperatures in the low 40's, most bundled up for the type of large-scale rally that has become the candidate's trademark.

"It's been a while, and it's a little cold, but we really like Barack. He's inspiring," said 19-year-old Caitlin McDonnell, wrapped in a blue Nittany Lions blanket. 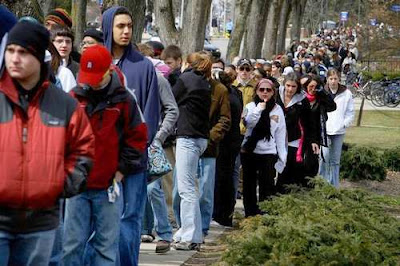 Pennsylvania's primary is the next contest in the Obama-Clinton fight for the Democratic presidential nomination. The Keystone State, which will allocate 158 delegates, is the biggest single delegate prize remaining in the Democratic primaries.

Some Democrats, particularly Obama's supporters, have voiced concern that the hard-fought, drawn-out race is already hurting the party's chances to win in November.

The Illinois senator told the crowd not to worry.

"As this primary has gone on a little bit long, there have been people who've been voicing some frustration," Obama said. 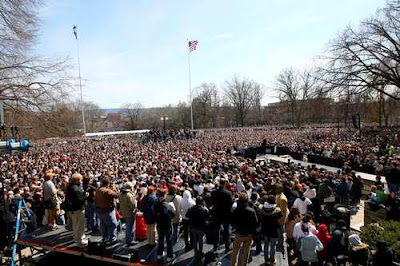 "I want everybody to understand that this has been a great contest, great for America. It's engaged and involved people like never before. I think it's terrific that Senator Clinton's supporters have been as passionate as my supporters have been because that makes the people invested and engaged in this process, and I am absolutely confident that when this primary season is over Democrats will be united."

Clinton's husband, the former president, said Sunday that those voicing concern about the duration of the nomination fight should just "chill out" and let the race run its course.

Obama's rally drew an estimated 20,000 to 22,000 people, according to university official Richard DiEugenio — by far the biggest in a weekend of smaller, face-to-face campaign stops since Obama launched a six-day bus tour through the state on Friday. 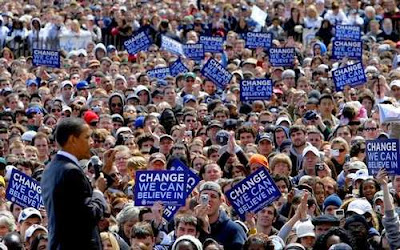 From Penn State, he traveled to the state capital of Harrisburg, where he delivered the same call for party unity. He also took aim at Republican nominee-to-be John McCain, saying the Arizona senator undercut his own credibility by supporting the lengthening of Bush administration tax cuts he previously opposed.

"The wheels on the Straight Talk Express came off," Obama said, referring to the nickname for McCain's campaign vehicle. "He wants to extend those same tax cuts that he said were irresponsible."

Earlier in the day, he visited a university-run dairy farm and fed a slurping one-month calf, laughing as the calf sucked hard on the nipple of the bottle, eventually draining it. "She chowed that sucker down," Obama said.

His weekend of campaigning also included a comical trip to the lanes at a bowling alley in Altoona, where he was, by his own admission, terrible.

"My economic plan is better than my bowling," Obama told fellow bowlers Saturday evening at the Pleasant Valley Recreation Center.

As he laced up his bowling shoes, Obama let everyone know he hadn't bowled since Jimmy Carter was president.

He shared a lane with Pennsylvania Sen. Bob Casey Jr., who endorsed him Friday and joined him on the bus tour, and local homemaker Roxanne Hart. As the game went on, several small children bowled with Obama as well.

Obama's first ball flew well off his hand but ended up in the gutter. On his second try, he knocked down four pins.

About five lanes over, a young man in a T-shirt that said "Beer Hunter" fell on his backside while bowling and still recorded a strike.

The crowd of regulars pressed in to take pictures, get autographs and rib him on his poor skills. 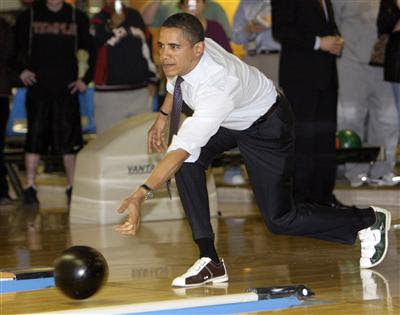 "I was terrible," Obama laughed as he shook hands with people in a crowd that gathered outside once word spread he was there.

Asked about his game, Hart sounded like a politician, saying: "He has potential."

Posted by Craig Hickman at 9:43 AM