Go Tell It On The Mountain

I wish that all the Lord’s people were prophets and that the Lord would put his Spirit on them!
—Numbers 11:29

Mankind was one single nation. And Allah sent Messengers with glad tidings and warnings; and with them he sent the book in truth…
—Surah 2:213

1
PEOPLE are so afraid. So afraid to end one cycle and begin another, full of newness and love, pregnant with the possibility of transcendence. Fear begets fear. And with hardly any nurturing whatsoever, fear matures to thieving terror.

People caught up in the terror-filled spinning are as common as spirit-dead people breathing. It becomes so difficult for anyone to choose the real when fear lurks wherever one turns: In a neighbor’s eyes. On the preacher’s face. In the backyard mingling with the grass roots. In line at the grocery store. Near the shower under the toiletry basket. Between the azaleas and rhododendrons. Over the hill, behind the projects. On television before, during, and after the weather report. In the mirror. When a person is caught up in the terror-filled spinning, trying to turn toward clarity is an impossible illusion.

Illusions by nature may sometimes be sweet, but behind the shroud of lies, lies a bitter treat. Or, heaven is the place where terror turns to autumn leaves and drifts away...

2
Indeed, I say to you, it will all be revealed. In time. Completely clear. In time. Sooner than later the blind will see. In time. But, till then, in times like these, you would want to remember: live in the Here and Now. For it will always be Here, always be Now. Forever and ever. Know it.

Brilliantly blessed are those who know.

Brilliantly blessed are those who forgive themselves, for they will be able to forgive all others their greatest wrongdoings.

Brilliantly blessed are those who walk with courage through the depths of their own sorrow, for they will walk also through the greatest joy and their Spirits will grow exponentially; for them, a healing will come.

Brilliantly blessed are those who share what they have with those who have not, for their generosity will be rewarded with even more to share.

Brilliantly blessed are those who seek perfection not in people or things, but in the process of Loving itself, for they shall possess clarity of insight.

Brilliantly blessed are those who belong to the trees and the animals, for their voices will grow plants like the sun and their kindness will kill the anger of strangers.

Brilliantly blessed are those who strive to create unity out of vast diversity, for they will experience Heaven on Earth.

3
Stop. No, you are no bad luck children. You are not terrible people. Look. Nor are you deceitful and manipulative. Your flaws are like those of the chaff. Listen to your heart, hear what its saying...

There are as many chaffed straws in the bale of hay as there are snowflakes in the winter storm.

Swallow the mystery life. Blood flows in the river, I say to you, it flows. Taste the current of minerals in the wind. Bathe in the light of loves lost and gained and lost again.

Stop. Look. Now, see the Parisian woman with the pale face walking down the street. She ushers a small child into a small store, but she does not see him go inside when his hand slips from hers and the door closes in front of him. 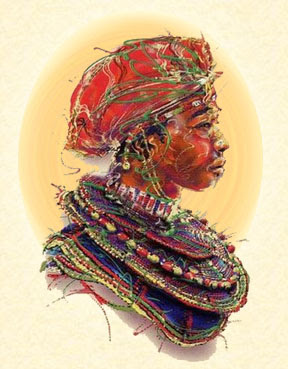 Stop. Look. Instead, her attention rests on the Zairian woman, encircled with an aura of gold, walking up the boulevard de Strasbourg against the rush of oncoming traffic. Caught up in the rapture of this Zairian woman who, right before her eyes, defies those reckless, ruthless French drivers, the Parisian woman does not see her little boy with the dark brown curls climb atop the window display shelf and stare out onto the street. Still transfixed by the sight of the Zairian woman, now parting traffic at high noon, the Parisian woman with the pale face cannot see what her little boy sees through the engraved picture window of the little French salon:

Two blocks up the street, a little Haitian girl with three pigtails sits on the sidewalk in front of a beauty store.

It rains on her.

Only on her, it rains; everywhere else, the sun shines brightly, fiercely at high noon. The little Haitian girl sits still in her rain, does not try to cover herself, does not melt.

The little Haitian girl with three pigtails sits also, despite her rain, in a beam of purple-pink light that emanates from above and behind her, away from her, and out onto the street, down the block.

The Zairian woman parting the traffic now walks down the middle of the boulevard as if drawn directly to the child’s light, which does not come from the sun in the sky above at high noon. She sees nothing else. No traffic, no flailing arms waving at her to move onto the sidewalk. She hears no car horns.

See now that the little boy sees all this.

Listen. He bangs feverishly on the window trying to get his mother’s attention. But he can’t get what’s not there to be gotten. Still, her attention rests on the Zairian woman, encircled with an aura of gold, walking down the boulevard de Strasbourg parting the oncoming traffic. There, the Parisian woman with the pale face savors a desire for disaster. But while waiting, mouth agape, to witness a disaster that will never happen, she does not, cannot, will not see what her little boy sees:

The little Haitian girl with the three pigtails who sits in rain and purple-pink light draws the Zairian woman to her with the force and mystery of miracles. And later, when the woman arrives, the little pigtailed Haitian girl will lead the Zairian woman inside the building and up the stairs to a room with walls the color of death where her mother eagerly awaits the woman’s arrival. And for the little girl’s mother, the radiant Zairian woman will perform a miracle. And the little curly haired boy beating feverishly against the inside of the storefront window knows this. He knows the power of the Zairian miracle worker. And he wants to show this to his mother, who does not know. Flesh of her flesh, fruit of her womb, he embodies his mother’s hopes and dreams for the future, her highest imagination of what is possible in the realm of the mortal. But more than that, the child, still untainted by too much expecting, knows more about mystery and magic than the adults he looks to for guidance.

This his mother knows. In the recesses of her mind, in the well of her spirit, in the marrow of her bones, she knows this secret all too well, for she too was once a child. But she cannot call forth this knowledge from the darkness of its chamber, the silence of its hiding place; she has grown too distracted by the scent of chaos, the copper taste of disaster.

And so, as if pounding on a wall of cotton while blindfolded, the brown-haired boy’s beating on the inside of the storefront window remains unheard; his vision, unseen. And the pale-faced Parisian woman, now accompanied in her desire by the swarming multitude of onlookers and a bevy of paralyzed Parisian police, blindly awaits a disaster that will never happen.

from Fumbling Toward Divinity: The Adoption Scriptures
Posted by Craig Hickman at 1:04 PM