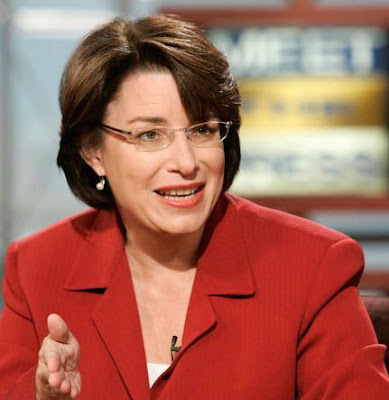 NEUTRAL. She said she'd remain neutral until all the primaries were completed. But Senator Amy Klobuchar, a freshman senator from Minnesota, changed her mind and endorsed Barack Obama today.

"Barack has inspired an enthusiasm and idealism that we have not seen in this country in a long time," she said in a statement to the Associated Press.

"He speaks with a different voice, bringing a new perspective and inspiring a real excitement from the American people.

"My endorsement reflects both Barack's strong support in my state and my own independent judgment about his abilities.

"Barack has been a proven agent for change and advocate for middle-class Americans."

That makes 64 superdelegate endorsements for Obama since February 5. Hillary Clinton has lost five in the same timespan. Other reports say she has gained nine. Whatever the truth, Obama is closing the superdelegate gap.

This is the first woman senator to endorse Obama since the beginning of the race. Coming on the heels of Pennsylvania Senator Bob Casey and New Mexico Governor Bill Richardson's endorsements, perhaps the floodgates are truly opening.

And with Clinton's continued appeals to rally women voters, a thumbs up from a prominent woman politician puts another message in the air.