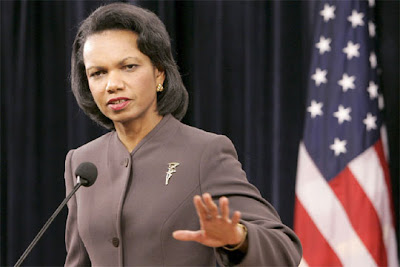 CONDOLEEZZA RICE has always perplexed me. Many Black conservatives do. She's made history as the first Black woman to serve as Secretary of State. But I've never been a fan. She's a Scorpio, after all. As is Hillary Clinton. Scorpios who haven't evolved behind their need for deep secrecy turn me off. Which means I probably still won't be a fan of Secretary Rice even after she has opened up about race in America in an interview with the Washington Times editorial board yesterday. But never throw the baby out with the bath water. Secretary Rice has continued a discussion that Barack Obama began on March 18, and even though she didn't have to defend an overblown controversy in doing so, she hit the nail on the head. Here are the pertinent responses:

QUESTION: Madame Secretary, I wanted to ask a question that has absolutely nothing to do with any other country. (Laughter.) We're pulling up on the 40th anniversary of the assassination of Martin Luther King. And regardless of what race we were or what class we belonged to, it was a devastating time for America, without a doubt. And there's so much talk about race in the race for the White House. What, if any, lessons do you think Americans, as a whole, have learned since then?

SECRETARY RICE: Well, you know, it's -- America doesn't have an easy time dealing with race. I sit in my office and the portrait immediately over my shoulder is Thomas Jefferson, because he was my first predecessor. He was the first Secretary of State. And sometimes I think to myself, what would he think -- (laughter) -- a black woman Secretary of State as his predecessor 65 times removed -- successor, 65 times removed? What would he think that the last two successors have been black Americans? And so, obviously, when this country was founded, the words that were enshrined in all of our great documents and that have been such an inspiration to people around the world, for the likes of Vaclav Havel, associate themselves with those documents. They didn't have meaning for an overwhelming element of our founding population. And black Americans were a founding population. Africans and Europeans came here and founded this country together; Europeans by choice, and Africans in chains.

And that's not a very pretty reality of our founding, and I think that particular birth defect makes it hard for us to confront it, hard for us to talk about it, and hard for us to realize that it has continuing relevance for who we are today. But that relevance comes in two strains. On the one hand, there's the relevance that descendents of slaves, therefore, did not get much of a head start. And I think you continue to see some of the effects of that. On the other hand, the tremendous efforts of many, many, many people, some of whom, whose names we will never know and some individuals’ names who we do know, to be impatient with this country for not fulfilling its own principles, has led us down a path that has put African Americans in positions and places that, I think, nobody would have even thought at the time that Dr. King was assassinated. And so we deal daily with this contradiction, this paradox about America, that on the one hand, the birth defect continues to have effects on our country, and indeed, on the discourse and effects on perhaps the deepest thoughts that people hold; and on the other hand, the enormous progress that has been made by the efforts of blacks and whites together, to finally fulfill those principles.

QUESTION: (Inaudible) Barack (inaudible) speech about race -- did you listen to it?

SECRETARY RICE: I did and, you know, I think it was important that he gave it for a whole host of reasons. But look, I'm not going to talk about the politics. What I'm talking about is how -- you asked me about Dr. King and race in America. And I'm telling you that there is a paradox for this country and a contradiction of this country and we still haven't resolved it. But what I would like understood as a black American is that black Americans loved and had faith in this country even when this country didn't love and have faith in them, and that's our legacy.

My grandmother and my great-grandmother, and my father, who endured terrible humiliations growing up -- and my father in Baton Rouge, Louisiana; and my mother's family in Birmingham, Alabama-- still loved this country. And I've often spoken of the Civil Rights Movement as the second founding of America, because finally we started to overcome this birth defect. But if anybody believes that black Americans love this country any less than white Americans do, they ought to go and talk to people who live under very tough circumstances, sometimes doing menial labor and doing tough jobs, and really all they want is the American dream. All they're focused on is is their kid going to be well educated enough to go to college and have a better life than they had. And one of the things that attracted me to George W. Bush, one of the primary things, it was not actually foreign policy, it was No Child Left Behind. Because when he talked about the soft bigotry of low expectations, I know what that feels like.

And so to my mind, where our understanding of and conversation of race has got to go. And I mean now, race. Black Americans aren't immigrants. We may call ourselves African Americans, but we're not immigrants. We don't mimic the immigrant story. Where this conversation has got to go is that black Americans and white Americans founded this country together and I think we've always wanted the same thing. And it's been now a very hard and long struggle to begin to get to the place that we can all pursue the same thing.

Posted by Craig Hickman at 2:05 PM