FIRST TIME in the Gallup daily tracking polls, Barack Obama reaches a simple majority and breaks away from Senator Clinton by 10 points among Democrats nationwide. I know these polls change and don't mean all that much, but it's a symbolic victory if nothing else. 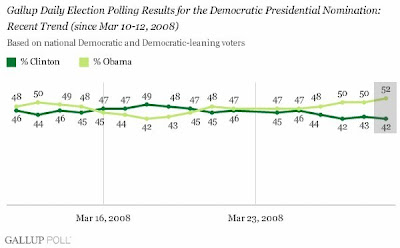 What kind of leader does tomorrow’s America need? And who among the presidential candidates is best suited to meet the challenges that the next leader of the world’s superpower will face? These are some of the questions American voters face as they are showered with political propaganda and a pumping, election-driven news flow where “experience” is weighed against “leadership for change.”

“What type of leader is needed depends entirely on the times,” says US anthropologist, psychoanalyst and leadership consultant Michael Maccoby, whose 35 years studying leadership have broken ground within the field. His recently published book, “The Leaders We Need and What Makes Us Follow,” finds him being frequently interviewed by American media about leadership styles, and which of the current candidates is best suited for the presidency.

”In times of great change and a lot of uncertainty, we tend to want leaders with great vision who dare to take great risks, like Churchill during the Second World War. In calmer times, we tend to seek a more conservative person who continues according to traditional patterns. Churchill was, to continue the example, not as successful in peace times,” the jovial and perky 75-year-old Maccoby says as he settles into his cozy kitchen in Washington D.C. for this interview. But, he concludes, the best leaders are those who can see needs and fulfil them – who can engage, strengthen and unify people.

“Today America is in the midst of an enormous historical shift. I would compare its magnitude to the Renaissance, when new international trade helped develop a new banking system and a new approach to art. Our lives have changed radically in just a few years with the advent of the Internet, new technology and advances in medical sciences,” he continues. “The economy is global and the labor market is increasingly dominated by knowledge-based work as opposed to industrial work. Meanwhile, in only two generations, women have entered the workplace, radically changing their role in society, and as a consequence, our family structures,” Maccoby says, raising his eyebrows in amazement at the transformational changes the western world has gone through in this short time.

But Maccoby doubts many Americans are fully aware of these major changes and this has led to confusion among voters; new political divides have sprung up across new demographic lines. This partly explains why the primary election has been unexpectedly open and full of surprises.

In times of great changes there are many who get very rich and others who don’t, and feel they are left behind and no longer fit in, Maccoby explains. Then bitterness often becomes a factor among political interest groups, which can hinder development. “In such situations we need forward-looking and insightful leaders who can grasp the development process and bridge differences, like Abraham Lincoln for example. He saw the coming industrial revolution and embraced the railroads and the mining and agricultural schools.”

“What America needs now is a leader who can see patterns and grasp complicated issues. A person who has a sense of history, who thinks analytically and systematically, who has vision, and who is not afraid of being surrounded by smarter people.” Pure physical strength is also essential in order to deal with the extreme stress of the job and to still be able to think clearly and understand complex problems. “But don’t forget humor!” Maccoby says with a big smile, wagging his right index finger in the air for emphasis. “Never trust a leader without a sense of humor! They lack humility and a sense of reality.”


Who Has the Best Profile?

Maccoby describes four psychological leadership types, developed from Freud’s theories. Simplified, the first type is the caring and erratic leader, who is common among leaders, teachers and nurses. Michael Huckabee is an example of this type. The second is the obsessive type: a problem solver who tends to lecture rather than listen. According to Maccoby, John McCain, Jimmy Carter and Al Gore belong to this category. The third is the productive narcissist who is a visionary, keeps an inner dialogue going and constantly keeps learning. Barack Obama and Bill Clinton fit this leader profile. The last category is the marketing type who adjusts to what other people say. “This makes it difficult to know what kind of politics he or she is going to follow once in power.” Maccoby believes that Hillary Clinton, Mitt Romney and George W. Bush belong to this last type.

So which candidate among today’s frontrunners – Clinton, Obama or McCain – does Maccoby think is best suited to lead America through the shift he talks about? “I think it is Obama. He is very intelligent, learns constantly and he listens. I believe he'll grow in office. And Obama's election would change the world's view of the US and the US's view of itself, all for the better.”

Like some of the United States’ most inspiring leaders – Lincoln, Roosevelt, Reagan, Bill Clinton, Nixon and Johnson – Barack Obama comes from a family with a weak or non-existent father figure and a strong mother figure, explains Maccoby. “This means they don’t identify with their fathers in childhood, nor do they have the super-ego’s moral right, but instead they have to determine their own meaning and forge their own identities.” In Obama’s case, his African father disappeared early, leaving him to be raised by white people from the Midwest. His white mother, who was an anthropologist, took him to Indonesia as a child. “There is nothing typically ‘black’ about the way he was raised, but because of how he looks, he has been treated as ‘black’ and has had to relate to that. This forced him to see through stereotypes and also helped him see an issue from different perspectives. Therefore he can explain that he understands an argument, but also why he doesn’t agree. It is a very important quality to be able to unite people.”

Many see in Obama the one person who can bridge the divide that has split America since the Vietnam War, and which forced a wedge between the Baby Boom generation and the one which preceded it. That divide encompasses culture, race and religion, and it only deepened under Bush. He has been described as a new Kennedy, a politician who embodies something bigger than himself – he urges a well-timed movement for hope, change and unity. And despite the fact that Obama’s politics don’t differ much from his party rival Hillary Clinton’s, he is for many a fresh and welcome break from the Bush and Clinton families, which have run America for nearly two decades. There is also a hope that the fact that Obama’s father was a Muslim and that he partly grew up in Muslim Indonesia would help improve the United States’ poor reputation in the Middle East following the Bush administration’s invasions of Afghanistan and Iraq.

While Obama can energize the country to support policies, Maccoby continues, Clinton as president is more likely to cause conflict and end up with an impasse. “She has been shaped by a tough, demanding father and her experiences in political wars. She is a jungle fighter who sees enemies everywhere and is always ready for a fight.” One reason her health care proposal did not succeed, he notes, is that she even fought Congress people in her own party. People who are close to Clinton say she has a great sense of humor and can be very warm one-on-one, but they admit she has a tough side. Clinton’s communications director Howard Wolfson describes Clinton’s idea of effective management as “get[ting] a lot of smart people around who don’t agree and let[ting] them work out their differences creatively.” Some pundits are now wondering if her campaign, which has been plagued by turbulence and infighting, could be seen as an indication of what a Hillary Clinton administration would be like.

Unlike Obama or McCain, Clinton is also secretive, which tends to make people wary of her, adds Maccoby. As an example, he mentions her insistence on not showing records on Whitewater, which indirectly caused the appointment of an Independent Prosecutor that led to impeachment. “And now she refuses to show her income tax reports and records of exactly what she did in the White House!”

Like Hillary, the Republican nominee John McCain is likely to alienate people he needs to achieve his policies, continues Maccoby. “He has high ideals and has supported positive, pragmatic policies. But he is stubborn and has a hot temper. He works well with anyone of any party who basically agrees with him, but if they don't, he acts as though they are ignoble, immoral and corrupt.” McCain is the son and grandson of admirals and a graduate of the Naval Academy – he is someone who has been shaped by a strong moral code of duty and national service, explains Maccoby. His six years as a prisoner of war in a Vietnam prison tested his dedication, courage and stubbornness and was a testimony to his ability to self-sacrifice. These characteristics were manifested in his taking positions against the right wing of his party on election finance, the environment and amnesty for illegal immigrants. As a result, McCain’s uncompromising style and new politics have given him an unexpected upswing among young and independent voters, but they have also estranged a substantial part of his party.


Not Always the Leader We Need

The debate has so far been dominated by political rhetoric and a fixation on the candidates’ personalities. Since less attention has been paid to the political issues, it is more difficult for voters to make well-informed decisions. Media bears a large responsibility for this, sighs Maccoby. “I think the media has been terrible. It focuses on petty attacks and does little to educate about the major issues that a president must address: globalization, war and terrorism, increasing inequality, the environment. The positions of the candidates should be examined carefully. They are not. The real issues should be addressed. They are not. The media shows the personalities of the candidates, but they don't connect personality to leadership behavior.”

Maccoby is also critical of the focus on the candidates’ experience whether in politics or crisis management. “There is no experience relevant to being president. Our most experienced president, Buchanan, was a dud. Lincoln and Roosevelt – great presidents – had little experience. George Bush was around the White House when his father was president and showed he had learned little.”

How someone will act in a crisis is difficult to gauge beforehand, he continues. “But both McCain and Clinton have shown they are tough and determined when they look near defeat. They will probably both act aggressively. Obama is more of a question mark. He is being tested now. Clearly, he has shown he can stay cool under attack. He is more likely than the others to seek a peaceful resolution of a crisis.”

Finally, Maccoby points out that we don’t always vote for the leaders we need. “Unfortunately, we tend to think short-term and choose leaders who can satisfy our immediate needs, not necessarily the ones who would ultimately be the best for us. Just look at Hitler and Bush.”

About the Author
Eva Sohlman is a Swedish journalist and writer with credentials in print, radio and TV. She was formerly the editor of The World in Focus ("Världen i Fokus"), a Swedish TV program which she produced that reports world news and in-depth studio interviews. The show follows Eva's international career reporting for Reuters and publications in The Economist, The New York Times and The Washington Post.