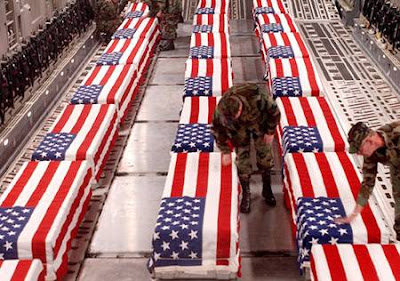 SLAIN WOMEN and men. 1 in 6 not even old enough to drink. Slain in a war for oil. Slain in a war which supports the greed of defense contractors. A war that has made American less safe. That has torn asunder the fragile stability of a region set to boil over.

And let's not forget the slain Iraqis, the orphaned children, the tortured innocent.

A quick takeover of a bad government and that would be that was the lie he told. It's turned into an imperialistic and corporatist occupation and those who are keeping us in it don't care what we the people think.