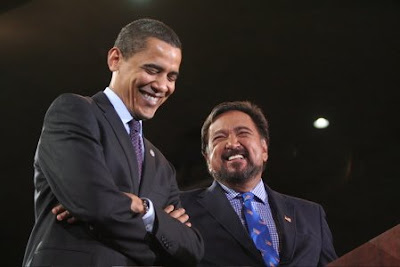 Watch the video of Richardson's endorsement...

“Today I am endorsing Senator Barack Obama for President of the United States because I believe he is the kind of once-in-a-lifetime leader that can bring our nation together and restore America’s moral leadership in the world,” Governor Richardson said. “As a Presidential candidate, I know full well Senator Obama's unique ability to inspire the American people to confront our urgent challenges at home and abroad in a spirit of bipartisanship and reconciliation.”

Over the course of a distinguished career as legislator, cabinet secretary, and diplomat, Richardson developed a nuanced understanding of America’s role in the world and the best uses of our power—issues that led him to choose Obama as the best equipped to handle the challenges facing the next President. Richardson served seven terms in Congress before being appointed by President Clinton to serve as Ambassador to the United Nations and, later, Secretary of Energy. He was elected Governor in 2002 and reelected in 2006. Richardson has negotiated with some of the world’s most unsavory regimes to secure the release of American prisoners, and has been active in seeking to secure loose nuclear materials and end the genocide in Darfur, both priorities shared by Senator Obama.

“Whether it was as a congressman or cabinet secretary, ambassador or governor, there are few more distinguished public servants in America than Governor Richardson, and I am deeply honored to have his support,” Senator Obama said. “He knows that to secure American interests, we have to talk to our enemies, as well as our friends, which is why he stood up to North Korea and Saddam Hussein to secure the release of American hostages. And that’s the kind of tough, aggressive diplomacy we need to meet the new challenges of the 21st century.”

Including Richardson, 62 superdelegates have endorsed Obama since February 5—compared to only two gained by Senator Clinton—as elected officials and party leaders are increasingly drawn to his unifying vision and broad coalition for change.

Here's the email Governor Richardson sent to his supporters...

During the last year, I have shared with you my vision and hopes for this nation as we look to repair the damage of the last seven years. And you have shared your support, your ideas and your encouragement to my campaign. We have been through a lot together and that is why I wanted to tell you that, after careful and thoughtful deliberation, I have made a decision to endorse Barack Obama for President.

We are blessed to have two great American leaders and great Democrats running for President. My affection and admiration for Hillary Clinton and President Bill Clinton will never waver. It is time, however, for Democrats to stop fighting amongst ourselves and to prepare for the tough fight we will face against John McCain in the fall. The 1990's were a decade of peace and prosperity because of the competent and enlightened leadership of the Clinton administration, but it is now time for a new generation of leadership to lead America forward. Barack Obama will be a historic and a great President, who can bring us the change we so desperately need by bringing us together as a nation here at home and with our allies abroad.

Earlier this week, Senator Barack Obama gave an historic speech. that addressed the issue of race with the eloquence, sincerity, and optimism we have come to expect of him. He inspired us by reminding us of the awesome potential residing in our own responsibility. He asked us to rise above our racially divided past, and to seize the opportunity to carry forward the work of many patriots of all races, who struggled and died to bring us together.

As a Hispanic, I was particularly touched by his words. I have been troubled by the demonization of immigrants--specifically Hispanics-- by too many in this country. Hate crimes against Hispanics are rising as a direct result and now, in tough economic times, people look for scapegoats and I fear that people will continue to exploit our racial differences--and place blame on others not like them . We all know the real culprit -- the disastrous economic policies of the Bush Administration!

Senator Obama has started a discussion in this country long overdue and rejects the politics of pitting race against race. He understands clearly that only by bringing people together, only by bridging our differences can we all succeed together as Americans.

His words are those of a courageous, thoughtful and inspiring leader, who understands that a house divided against itself cannot stand. And, after nearly eight years of George W. Bush, we desperately need such a leader.

To reverse the disastrous policies of the last seven years, rebuild our economy, address the housing and mortgage crisis, bring our troops home from Iraq and restore America's international standing, we need a President who can bring us together as a nation so we can confront our urgent challenges at home and abroad.

During the past year, I got to know Senator Obama as we campaigned against each other for the Presidency, and I felt a kinship with him because we both grew up between words, in a sense, living both abroad and here in America. In part because of these experiences, Barack and I share a deep sense of our nation's special responsibilities in the world.

So, once again, thank you for all you have done for me and my campaign. I wanted to make sure you understood my reasons for my endorsement of Senator Obama. I know that you, no matter what your choice, will do so with the best interests of this nation, in your heart.

Posted by Craig Hickman at 1:04 PM