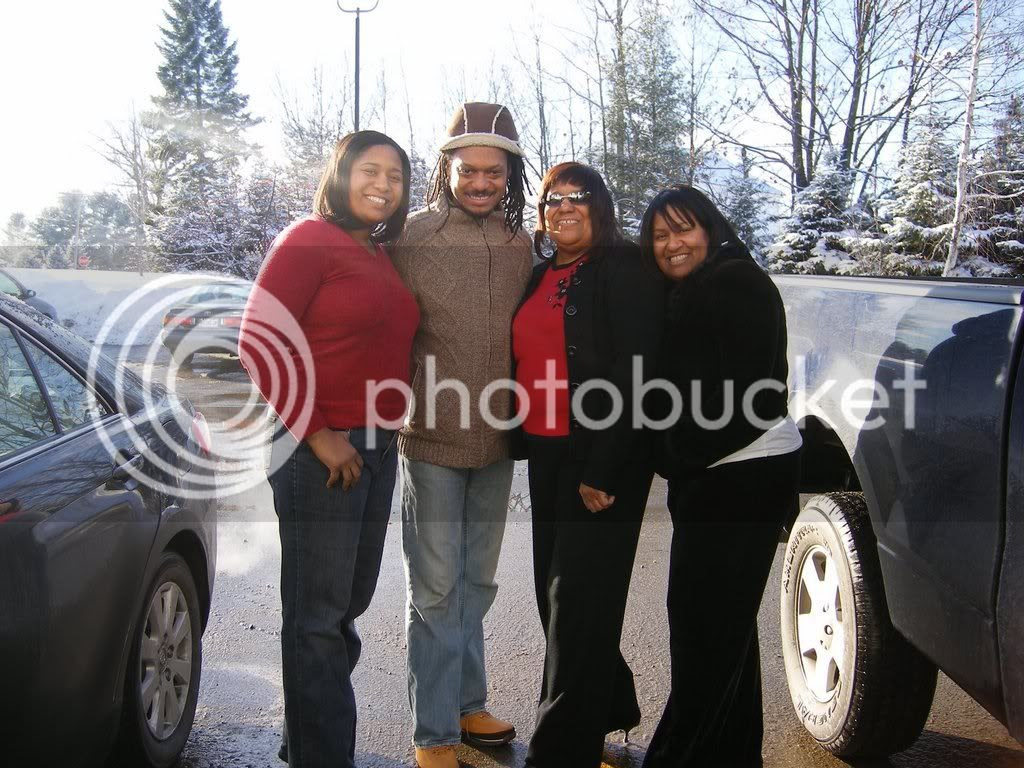 MY BIRTH MOTHER was right. That's her on my left shoulder, bookended by two of my sisters.

While my recollection is vague (I'm aging), she was one of the first people to tell me that Senator Barack Obama was the real thing. My husband was the first, but as much as I trust his opinion on most matters, I wondered if something other than Obama's realness compelled him to pay attention.

But, like Job, my birth mother would also have known a year or so ago when she told me about the emerging political star how disillusioned over the past decade I'd become with politics in general, national politics in particular. Would have known that my passion for politics was merely in hibernation. That anything on the political landscape with the potential to awaken it was something I'd love, almost need, to know about.

The seeds were planted. Cliche, I know. But I'm a farmer so the metaphor has more merit for me than a mere figure of speech.

I went on about my business. The next thing I know, I'm caucusing in Maine for Senator Barack Obama.

Today I've been reflecting on when I had my Obama Moment and I haven't come up with anything. Probably because I haven't had one. Quiet as it's kept, some of us became let the seeds germinate and sprout slowly and used our logic, not or passions, to decide to jump onto his side.

In amassing a large coalition of young and old, black and white Democrats, independents and some Republicans, Obama offers the possibility that America can finally get beyond its partisan stalemates. If that happened, a united nation would be better equipped to move forward on everything from the economy to the scourge of Islamic terror.

How has this "inexperienced" phenomenon who was "hatched", as my best friend Gail says, run a presidential campaign against the well-oiled machine of an American political dynasty, a campaign that is able to build such a large coalition, a coalition his allies are calling a movement, making a member of that dynasty resort to Machiavellian tactics to try to take back a nomination she never even thought she'd have to fight for from jump?

Because he's an inspiring orator, most will tell you, full of rhetoric, where rhetoric is a four-letter word.

I'm a poet. You don't score any points with me by dismissing rhetoric as bullshit. Rhetoric is the art of verbal persuasion. The key word here is art, not persuasion. Senator Obama is an artist in the body of a statesman. It's easy to call him a "rock star" because the most influential rock stars are also among the best artists.

Artists are spirits of substance. They are creative, visionary, and courageous. But most of all, they are wise. It's the wisdom, not the rhetoric, that have drawn voters to him. And that wisdom conveys a profound philosophy captured in a powerful message. Cast away fear, hang on to hope, believe in yourself, and actively participate in your own life. Then, and only then, can we come together to bring about the change we're starving for.

My wise mother, the one who adopted me, has always said, "Wisdom knows wisdom when it sees it." You either have it or you don't.

Senator Obama has it. And sometime between when he won Iowa and lost New Hampshire, when I came down from my sister's wedding, when I was finally able to pay attention to him, I saw it. Doesn't mean he won't make mistakes. But wise people admit their mistakes, learn from them, and move on. Their moral judgment remains clear.

I'm grateful my birth mother and my husband saw it too. Grateful they planted those seeds in the fertile soil of my mind/soul. It's high time a man of wisdom and moral judgment leads our nation out of the paralysis of fear and terror, out of polarization and partisan politics, out of corporatocracy and warmongering.

Posted by Craig Hickman at 1:30 AM

Your mom may be right about wisdom knowing wisdom when it sees it. But I disagree that you either have it or you don't. We all have it. Just some of us care enough to use it.

It takes an honesty and commitment of character to heed wisdom. It is easier to ignore it. It is easier to let empty words and promises fool us into believing that which is not so or not possible. Most of our politicians have developed this "empty words" ability.

Barack seems different to me. Yeah, he has the rhetoric down, but he has also indicated an honesty along with those words. He does not promise he will do something. He promises to try. He does not hide from the indisgressions of his youth, he brought them out in the open for all to see.

I would expect him to bring a message of hope to his campaign. To do otherwise would be self-defeating. By keeping his message of hope generic, he allows us the hope he will guide us as needed instead of steering us in a pre-determined direction.

I am not sure if I am getting my point out clearly here. But the bottom line is Barack offers up for me the most refreshing change in American Politics in 40 years.

"But I disagree that you either have it or you don't. We all have it. Just some of us care enough to use it."