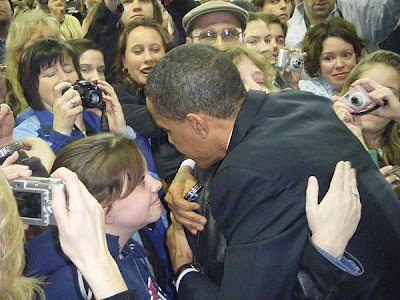 Senator Obama embraces Tracy Jopek who lost her son Ryan in Iraq. He mentioned Ryan in his victory speech before 20,000 supporters in Houston. Read the story.

LAST NIGHT, I was nervous. Among friends, I had been predicting a Hillary Clinton upset in Wisconsin. But that was before I recalled that Wisconsinites don't like negative politics. Something I didn't remember until the elections returns starting rolling in, indicating that Senator Clinton was about to take her ninth loss in a row. And then her tenth in Hawaii. Both by landslides.

But my anxiety revealed just how emotionally invested I am in the presidential primary race. How strongly I've embraced Barack Obama as my candidate for the next leader of the free world.

I outlined here how I came to this place. But as people on a spiritual path are fully aware, the more we look, the more we see.

Yesterday I stumbled across a serious of stories on the importance of the narrative in a presidential campaign.

It was among the best political writing I've read in a long time. Certainly because it spoke to me as a storyteller. The three enlightening articles are linked below.

I read the related article about Hilary - makes some good points. But would she do it? Sounds like the smartest move for her, IMVHO.