The Assassination We Should Fear 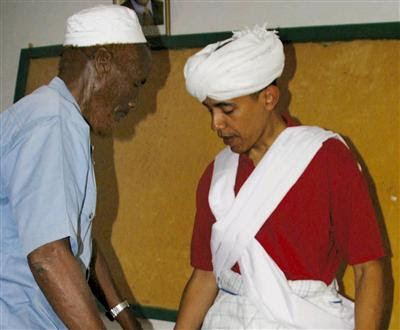 The social death of slavery has cut off many black Americans from our ancestral narratives. During Black History Month we adopt our collective accomplishments and our common heroes as a salve against our lost personal stories. This is critically important, but there is something special about naming your own ancestors and encountering yourself in their reflections.

Yet here in Black History Month, Obama's own black history is being used as a weapon against him. President Bush can traipse around the motherland safely encased in his armor of whiteness. No one can mistake him for a "native". His role is simply to dispatch the White Man's Burden with billions in abstinence-based HIV/AIDS programs and malaria-fighting mosquito netting. In a single photo, Barack can be painted as indelibly tied to a deep and mysterious, exotic and dangerous Dark Continent that produced the shame of slavery and the fear of Islamic radicalism.

Obama is vulnerable. This is the assassination that we should fear, because the Secret Service cannot protect him from it. The voters of Ohio and Texas will have to be the armored vest against these attacks. South Carolina voters soundly repudiated the Clintons for their race-baiting strategies. I believe that Ohio and Texas voters will ignore this revival of fear-based politics and embrace a new direction for American elections.

[via Jack and Jill Politics]