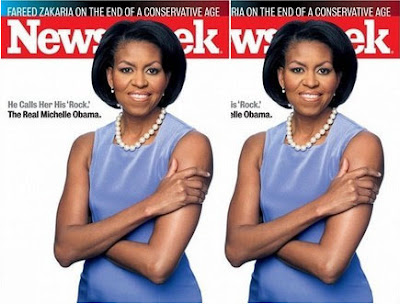 SHE'S READY. And Newsweek magazine has the skinny on Michelle Obama, the extraordinary wife of Senator Barack Obama, in an excellent cover story entitled, "Barack's Rock."

Michelle Obama was never much interested in calling attention to herself. As an undergrad at Princeton in the 1980s, she was interested in social change, but didn't run for student government. Instead, she spent her free time running a literacy program for kids from the local neighborhoods. At Harvard Law, she took part in demonstrations demanding more minority students and professors. Yet unlike another more prominent Harvard Law student who would later take up the cause, she was not one to hold forth with high-flown oratory about the need for diversity. "When [Barack Obama] spoke, people got quiet and listened," recalls Prof. Randall Kennedy. "Michelle had a more modest, quieter, lower profile." Barack won election as president of the Law Review. Michelle put her energy into a less glamorous pursuit: recruiting black undergrads to Harvard Law from other schools. For her, politics wasn't so much about being inspirational as it was being practical—about getting something specific done, says Charles Ogletree, one of her professors. "She was not trying to get ahead."

She no longer has the luxury of keeping a low profile. Now a very public figure, Michelle has accepted the role of aspiring First Lady and the sometimes uncomfortable scrutiny that comes with it. On the campaign trail, she is sometimes slated as the opening act, introducing Barack to the audience. Direct and plain-spoken, with an edgy sense of humor uncommon in a political spouse, she complements her husband's more grandiose style...She wants to change the world, but she also wants to win this thing now that they're so deeply invested. If his loftiness can set him apart from the crowd, her bluntness draws them in...

From the beginning of the campaign, Michelle made it clear to her husband that she would give the effort her all ("We need to be in there now, while we're still fresh and open and fearless and bold," she told Vanity Fair last December), but not at the expense of family life.

...At the meetings, Axelrod and the other aides addressed each of Michelle's questions. "Suffusing these discussions was, if we did it, she and he both wanted to make sure it was consistent with who he is and what he thinks, and wouldn't distort that," says Axelrod. She has expressed fears that the nastiness of presidential politics could wind up sucking the idealism out of her husband, leaving him just another soulless, cynical Washington pol. "Michelle has always been in the camp of, 'Let's not forget what we're fighting for'," Axelrod says. After the meetings, Michelle gave Barack her blessing.

...Part of Michelle Obama's appeal—she routinely draws audiences of 1,000-plus supporters even when she's campaigning on her own—is that she comes across as so normal despite the withering glare of a national campaign. As a political spouse, she is somewhat unusual. She isn't the traditional Stepford booster, smiling vacantly at her husband and sticking to a script of carefully vetted blandishments. Nor is she a surrogate campaign manager, ordering the staff around and micromanaging the candidate's every move. She travels the country giving speeches and attending events (her mother watches the kids when she's on the road), but resists staying away for more than one night at a stretch. When the couple catch up several times a day on the phone, the talk is more likely to be about their daughters than the latest poll projections. Michelle has made it her job to ensure that Barack, who now lives full time inside the surreal campaign bubble of adoring crowds and constant attention, doesn't himself lose sight of what's normal.

Onstage, Obama has introduced Michelle as "my rock"—the person who keeps him focused and grounded. In her words, she is just making sure he is "keeping it real."...She insists that Barack fly home from wherever he is to attend ballet recitals and parent-teacher conferences. When the couple host political gatherings at their home in Chicago's Hyde Park, Michelle asks everyone to bring along their children. To help bridge the physical distance between father and daughters, Michelle recently bought two MacBook laptops, one for Barack and one for the kids, so they could have video chats over the Internet. Last Thursday, she cleared his schedule so he could return home to Chicago and spend Valentine's Day with her and the girls.

Those who know her invariably describe Michelle as poised, relaxed and confident. "There is no difference between the public Michelle and the private Michelle," says University of Chicago law professor David Strauss, who sits with her on the board of the University of Chicago's Lab School. (The Obamas' daughters attend the school.) "There's no pretense."...

...In 1989, she was assigned to mentor a young, unconventional summer associate by the name of Barack Obama. Michelle was unimpressed by the office gossip about the hotshot Harvard Law student, a biracial intern from Hawaii whom she dismissed as "a black guy who can talk straight." But she was disarmed by his confidence. He walked up to her one day and said, "I think we should go out on a date." She resisted, thinking it was inappropriate. She dropped her guard after he asked her to go to one of his community-organizing sessions in a church basement, where he delivered a stemwinding speech about closing the gap between what he called "the world as it is, and the world as it should be."

She was smitten. "I was, like, 'This guy is different'," she says. "'He is really different, in addition to being nice and funny and cute and all that. He's got a seriousness and a commitment that you don't see every day'." She recalls thinking, " 'Well, you know, I'd like to be married to somebody who felt that deeply about things'." At this, she paused for a second. "Maybe I didn't say 'marry.' Scratch that part. It took him a little while." Each of them offered the other something they had lacked growing up—for her, a free-thinking outlook, for him, a sense of stability.

...After she worked for the city for a couple of years, Barack led Michelle closer to community activism. He was on the board of a start-up group called Public Allies, a nonprofit that encouraged young people to go into public service—just the kind of encouragement she felt she had never gotten. The organization needed a Chicago director. The job paid even less than her city post. "It sounded risky and just out there," she says. "But for some reason it just spoke to me. This was the first time I said, 'This is what I say I care about. Right here. And I will have to run it'." (Michelle jokes that she took a pay cut with every new job. The couple finally got out of debt when Barack's book, "The Audacity of Hope," became a best seller.) More recently, she inspired a program to send doctors from the prestigious University of Chicago Medical Center into community hospitals and clinics in poor surrounding neighborhoods...

...In her stump speech, she uses her own life as a rebuke to those who have said that she and her husband aren't ready for the White House. She tells the story of a 10-year-old girl she met in a beauty parlor in South Carolina who told her that if Barack wins the White House, "it means I can imagine anything for myself."

That story, Michelle says, was just like her own: "She could have been me. Because the truth is, I'm not supposed to be here, standing here. I'm a statistical oddity. Black girl, brought up on the South Side of Chicago. Was I supposed to go to Princeton? No … They said maybe Harvard Law was too much for me to reach for. But I went, I did fine. And I'm certainly not supposed to be standing here." Whatever lingering doubts Michelle Obama may still have, moving into the White House would go a long way toward putting them to rest.

To read the rest of the article about this phenomenal woman, click here.

If you want to see that Barack isn't the only inspiring orator in the Obama family, check out Michelle in action.

Posted by Craig Hickman at 1:29 AM