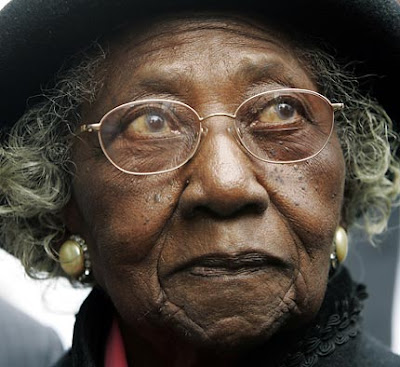 JOHNNIE CARR, who joined childhood friend Rosa Parks in the historic Montgomery bus boycott and kept a busy schedule of civil rights activism up to her final days, has died. She was 97.

Carr succeeded the Rev. Martin Luther King Jr. as president of the Montgomery Improvement Association in 1967, a post she held at her death. It was the newly formed association that led the boycott of city buses in the Alabama capital in 1955 after Parks, a black seamstress, was arrested for refusing to give up her seat to whites on a crowded bus.

"Johnnie Carr is one of the three major icons of the Civil Rights Movement: Dr. King, Rosa Parks and Johnnie Carr," said Morris Dees, co-founder of the Southern Poverty Law Center. "I think ultimately, when the final history books are written, she'll be one of the few people remembered for that terrific movement."

As the Improvement Association's president, Carr helped lead several initiatives to improve race relations and conditions for blacks. She was involved in a lawsuit to desegregate Montgomery schools, with her then-13-year-old son, Arlam, the named plaintiff.

"She hadn't been sick up until she had the stroke," Arlam Carr said Saturday. "It was such a massive stroke that she never was able to recover from it. She was still very active - going around and speaking - but it was just one of those things."

She played a prominent role in 2005 on the 50th anniversary of Parks' refusal to give up her bus seat, speaking to thousands of schoolchildren who marched to the Capitol.

"Look back, but march forward," Carr urged the huge crowd of young people.