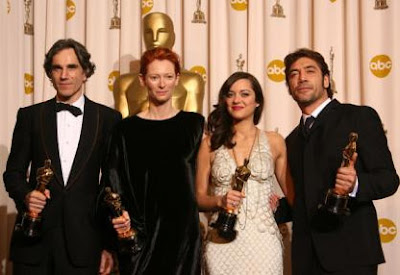 I MUST ADMIT, I haven't seen many of the films or performances that were nominated for the 80th Annual Academy Awards last night. I saw Juno and Ellen Page (laughed so hard I snorted), La Vie en Rose and Marion Cotillard (bad movie, superb performance), Away From Her and Julie Christie (better than I expected, luminous performance), and Eastern Promises and Vitto Morgensen (violent movie, good performance).

For the first time since the 1965 ceremony, all the acting awards went to foreigners. See their acceptances speeches. France's Marion Cotillard was named best actress for portraying singer Edith Piaf, the first French woman to win the award since Simone Signoret at the 1960 ceremony. Javier Bardem became the first Spaniard to win an acting Oscar for his role as a murderer with bad hair in Best Picture winner No Country For Old Men. British-Irish dual citizen Daniel Day-Lewis took his second statue for Best Actor for his unanimously acclaimed turn in There Will Be Blood. Tilda Swinton, also from England, was the surprise winner of the Best Supporting Actress statue for her portrayal of a cut-throat attorney in Michael Clayton.

One paragraph, two references to the 60s. Where have we been hearing that recently?

In an article in the Suffolk University student newspaper, Andrew Favreau compared Obama's campaign to "the movement that my parents lived through back in the 60s, and that I had wished I had the opportunity to experience. ... What I'm interested in is that millions of people believe again. They believe in America, and they believe in one another, but more importantly they are filling themselves with hope."

Last night, Jon Stewart allowed Marketa Irglova, the second writer of the Oscar winning song "Once", to say something after the music, which was supposed to end the winners' acceptance speech, died down.

This is such a big deal, not only for us, but for all other independent musicians and artists that spend most of their time struggling, and this, the fact that we're standing here tonight, the fact that we're able to hold this, it's just to prove no matter how far out your dreams are, it's possible. And, you know, fair play to those who dare to dream and don't give up. And this song was written from a perspective of hope, and hope at the end of the day connects us all, no matter how different we are.

I couldn't have said it better.