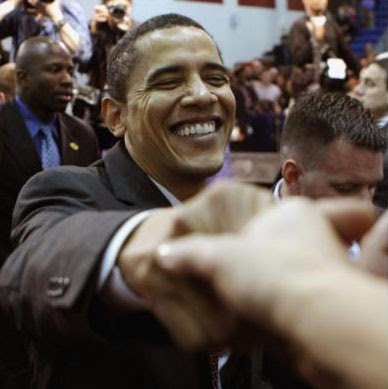 MAINE IS A FOREIGN country. I have always said that. The state slogan is "The Way Life Should Be" and in countless ways, that's true.

One of those ways is that it held its democratic state caucuses on a Sunday. Imagine that. A Sunday. When the majority of Mainers who work don't have to. So we can easily go and spend time in our precincts to participate in the political process undeterred by having to jump through hoops.

I've lived in exactly three states in my lifetime: Wisconsin, Massachusetts, and Maine. Maine is the only state where caucuses elect delegates for the national conventions instead of primaries.

I couldn't wait to participate in a caucus, and I got quite a rush out of it. It's a community event. Like bingo. But you know what you're doing is far more important than trying to win the lottery.

The Winthrop caucus had 206 participants, almost twice the amount who caucused there in 2004. And there was a snowstorm to navigate this time around. There were several 17-year-olds who will be eligible to vote in November who could participate in the caucus based upon a new Maine law.

One person spoke for Clinton. Several others spoke for Obama, including a few Republicans who'd never voted for a Democrat in their lives and who changed their party affiliation in time to take part in the Democratic caucus. One woman who freely admitted an apathy that kept her from participating in the political process for years couldn't stay away this time. She's inspired for the first time in her life by a candidate and she wants to ride the Obama bandwagon all the way to Washington. 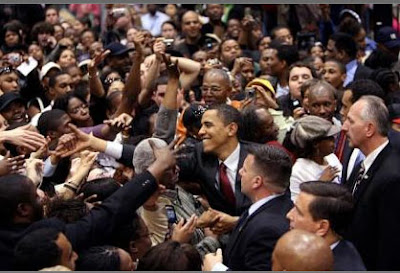 When we finally divided up into our groups, 130 people caucused for Obama; 80 for Hillary Clinton. He received 11 delegates to the state party convention; she received 6.

The Obama caucuses included the oldest person in the room and the youngest, including all those 17-year-olds who are still in high school. It included more women than men. And the only two Black men in the house.

I was so excited, I decided to run for one of the 11 precinct delegate to the state convention and I received unanimous support from the caucus. I guess it was my enthusiasm and theatrical personality that won me the votes? Or maybe it was the color of my skin. I mean, it's not like everyone who raised their hands knew who I was. Whatever the case, I'll take it and represent the town of Winthrop and the Obama supporters well.

And if I have my way after having my say, I'll win my campaign later this year for state delegate to the national convetion in Denver and be one of a handful of Black men from the whitest state in the Union to help select the first Black president of the United States. 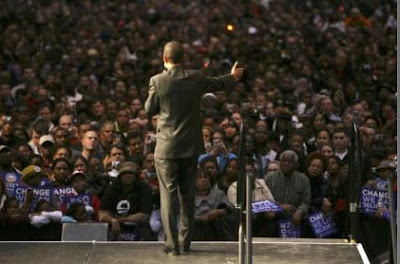 There have been times in the past 7 years I wished Maine was indeed a foreign country not just in spirit, but with a real border crossing at the bridge in Portsmouth. But it's almost over now. Less than a year left to about the worst leadership in my lifetime.

Glad Barack did well. I hope he carries it through to taking the oath in Jan. 2008. With the bar set so low by our boy Bush Jr., he won't have to work too hard to come out smelling likr a rose.

Ok, I don't pay too much attention to US politics, but this is quite fascinating.