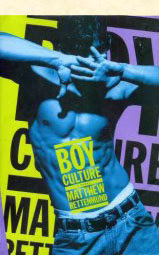 MATTHEW Rettenmund, who wrote the critically-acclaimed novel Boy Culture, which will be released as a feature film in March, and pens a blog by the same name has reviewed my memoir, which this blog is named after.

Nothing else is as sensational as the brief [Jeffrey] Dahmer tale, but the book is full of small remembrances by Hickman and his newly discovered family that render it a sort of quilt to be taken in and appreciated both as a whole and part by part.

I used to work as an assistant literary agent and later as an editorial assistant at St. Martin’s Press, so I cringe at memoirs—you would not believe the mundane, artlessly realized, offensive, egolicious manuscripts (back when those existed) that I’ve sifted through. For that, I am gun-shy about memoirs. But Fumbling Toward Divinity, with its sometimes experimental prose, its clear understanding of the implications of Hickman’s story and its intellectual humor (jokes are not told, jokes are documented and preserved as insight into character), more than makes up for some of those misguided efforts.

For a reluctant reader of books like me, it was well worth the fumble with my reading glasses and my limited time for the divine pay-off.

Posted by Craig Hickman at 5:00 PM

nice, very nice. Thanks for posting this. Now I am intrigued to read more.