AUDRE LORDE (1934-1992) - Audrey Geraldine Lorde was born on February 18, 1934 in New York City. She decided to drop the y from the end of her name at a young age, setting a precedent in her life of self determination. She was the daughter of Caribbean immigrants who settled in Harlem. She graduated from Columbia University and Hunter College, where she later held the prestigious post of Thomas Hunter Chair of Literature. She was married for eight years in the 1960s, and had two children, Elizabeth and Jonathan.

Lorde was a self-described “Black lesbian, mother, warrior, poet.” However, her life was one that could not be summed up in a phrase.

Lorde collected a host of awards and honors, including the Walt Whitman Citation of Merit, which conferred the mantle of New York State poet for 1991-93. In designating her New York State’s Poet Laureate, the Governor, Mario Cuomo, said: “Her imagination is charged by a sharp sense of racial injustice and cruelty, of sexual prejudice . . . She cries out against it as the voice of indignant humanity. Audre Lorde is the voice of the eloquent outsider who speaks in a language that can reach and touch people everywhere.”

Her first poem was published in Seventeen magazine while she was still in high school. The administration of the high school felt that her work was too romantic for publication in their literary journal. Lorde went on to publish over a dozen books on poetry, and six books of prose.

Audre Lorde the Teacher and Activist

Lorde worked as a librarian while refining her talents as a writer. In 1968, she accepted a teaching position at Tougaloo College in Jackson, Mississippi where the violence that greeted the civil rights movement was close at hand every night. This period cemented the bond between her artistic talents and her dedication to the struggle against injustice.

Lorde went on to provide avenues of expression to future generations of writers by co-founding the Kitchen Table: Women of Color Press. She was at the center of the movement to preserve and celebrate African American culture at a time when the destruction of these institutions was on the rise. Her dedication reached around the world when she formed the Sisterhood in Support of Sisters in South Africa. She was one of the featured speakers at the first national march for gay and lesbian liberation in Washington, D.C. in 1979. In 1989, she helped organize disaster relief efforts for St. Croix in the wake of Hurricane Hugo. 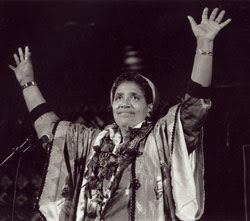 Late in life, Audre Lorde was given the African name Gamba Adisa, meaning “Warrior: She Who Makes Her Meaning Clear.” It is a name that applies to her whole life. Her struggle against opression on many fronts was expressed with a force and clarity that made her a respected voice for women, African Americans, and the Gay and Lesbian community.

Lorde’s son Jonathan Rollins recalled the warrior spirit that his mother possesed by stating that not fighting was not an option -- “We could lose. But we couldn’t not fight.”

“The quality of light by which we scrutinize our lives has direct bearing upon the product which we live, and upon the changes which we hope to bring about through those lives.” ( Poetry Is Not A Luxury)

“When I dare to be powerful - to use my strength in the service of my vision, then it becomes less and less important whether I am afraid.”

“I have come to believe over and over again that what is most important to me must be spoken, made verbal and shared, even at the risk of having it bruised or misunderstood.”

“Your silence will not protect You.”

Lorde bravely documented her 14-year battle against the cancer in The Cancer Journals and in her book of essays A Burst of Light. In the latter she wrote:

The struggle with cancer now informs all my days, but it is only another face of that continuing battle for self-determination and survival that black women fight daily, often in triumph.

She struggled against disease and a medical establishment that was frequently indifferent to cultural differences and insensitive to women’s health issues. She stood in defiance to societal rules that said that she should hide the fact that she had breast cancer. 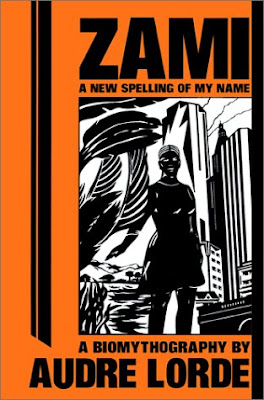 Read her novel/memoir Zami: A New Spelling of My Name, Crossings Press, Trumansburg, NY, 1982.
See the film “A Litany for Survival: The Life and Work of Audre Lorde” by Ada Griffith and Michelle Parkerson, 1994.
Read the award winning book A Burst of Light, Firebrand Books, Ithica, NY, 1989.

(Above text taken from lambda.net)

I just finished reading Zami. What a powrful book. Every sentence is poetry. In one of my plays, I quote Audre. Thanks for sharing her on your blog.

I guess we're in each other's heads.