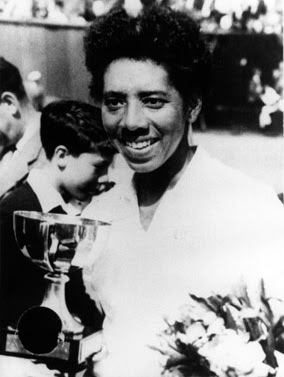 In 1956, Althea became the first person of her race to win the French Championship by defeating England's Angela Mortimer, 6-3, 11-9. 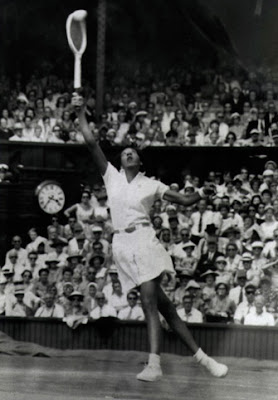 The world of women's tennis had not seen a player with the athletic ability and stature displayed here by Althea in 1957 at Wimbledon. 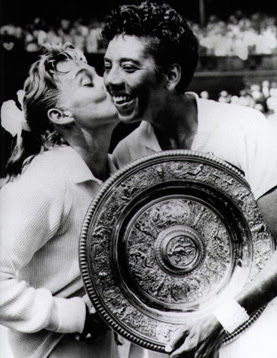 Althea is being congratulated by her gracious opponent, Darlene Hard, after defeating her in the Wimbledon finals in 1957. 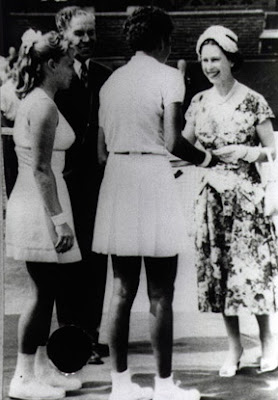 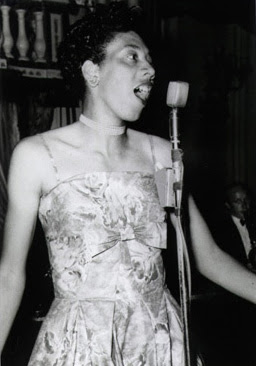 It was quite an honor when Althea was asked to sing at this 1957 Wimbledon ball. 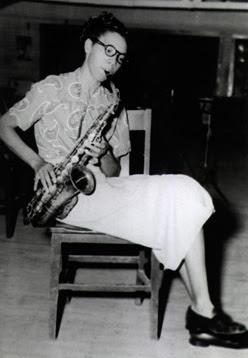 Althea playing the saxophone given to her by her lifelong friend and supporter Sugar Ray Robinson. 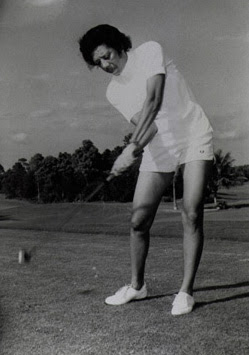 After qualifying for the Ladies Professional Golf Association in 1964, Althea played in 171 LPGA Tournaments. 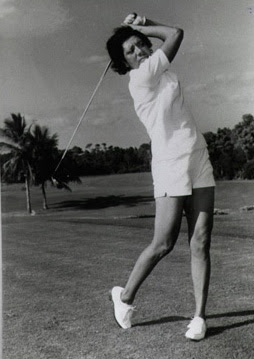 Althea was one of the longest hitters in the game, on occasion, driving the ball 325 yards "if she got a tail wind." 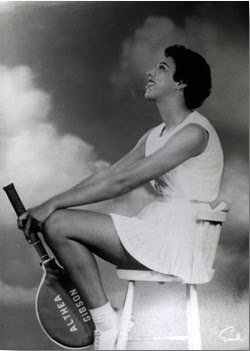 Althea poses for a glamour shot. 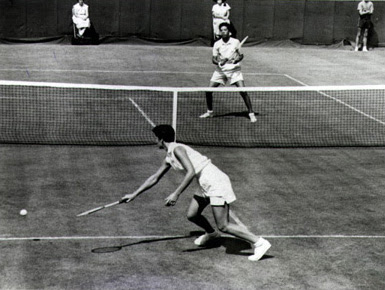 Playing here during the State Department Goodwill Tour which took place in 1956. 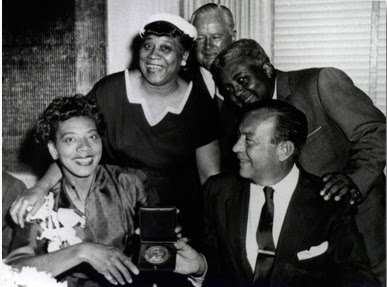 Althea's parents, Daniel and Annie, look on as Althea is presented with the Medallion of the City by Mayor Wagner after the 1957 ticker tape parade given in recognition for her Wimbledon victory.

Althea Gibson
Born August 25, 1927 in Silver, SC. A right-hander, [she] grew up in Harlem. Her family was poor, but she was fortunate in coming to the attention of Dr. Walter Johnson, a Lynchburg VA physician who was active in the black tennis community. He became her patron as he would later for Arthur Ashe, the black champion at Forest Hills (1968) and Wimbledon (1975). Through Dr. Johnson, Gibson received better instruction and competition, and contacts were set up with the USTA to inject her into the recognized tennis scene.

A trailblazing athlete who become the first African American to win championships at Grand Slam tournaments such as Wimbledon, the French Open, the Australian Doubles and the United States Open in the late 1950s. Gibson had a scintillating amateur career in spite of segregated offerings earlier in the decade.

She won 56 singles and doubles titles during her amateur career in the 1950s before gaining international and national acclaim for her athletic prowess on the professional level in tennis.

In 1957, she was the first black to be voted by the Associated Press as it Female Athlete of the Year. She won the honor again in 1958. After winning her second U.S. Championship, she turned professional. One year she earned a reported $100,000 in conjunction with playing a series of matches before Harlem Globetrotter basketball games.

There was no professional tennis tour in those days, so Gibson turned to the pro golf tour for a few years, but she didn't distinguish herself. She tried playing a few events after open tennis started in 1968, but she was in her 40's and too old to beat her younger opponents. She worked as a tennis teaching pro after she stopped competing.

She became New Jersey State Commissioner of Athletics in 1975, a post she held for 10 years. She then served on the State's Athletics Control Board until 1988 and the Governor's Council on Physical Fitness until 1992. On September 28, 2003 at the age of 76, Althea Gibson died in East Orange General Hospital.

The title of her autobiography, written in 1958, is "I Always Wanted to Be Somebody." To tennis fans, she always will be somebody very special. Though she didn't go looking for the role of pioneer, she was one. "If it hadn't been for her," says Billie Jean King, winner of 12 Grand Slam singles titles, "it wouldn't have been so easy for Arthur (Ashe) or the ones who followed."

All photos and text taken from altheagibson.com

Posted by Craig Hickman at 1:39 PM

wow oh wow. I never knew. Thanks for honoring Althea and sharing so much of her career and talent with us.

My pleasure. Her legacy has been honored, but a whole slew of people have no idea how great she was, how much overall talent she possessed, even off the tennis court. She recorded a few albums as a singer, even dabbled in acting.