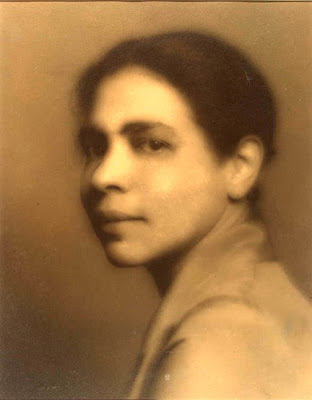 NELLA LARSEN (1891-1964) - Larsen’s importance as a writer is based upon her two novels; she was unable to complete a third one. She spent her last thirty years as a supervising nurse at a Brooklyn hospital. Both Quicksand and Passing are admired for their use of irony and symbolism dealing in themes of identity, passing, marginality, race consciousness, sexuality, and class distinction. Her novels place her as one of the best fiction writers of the 1920s. Nella Larsen’s celebrity has followed an unusual trajectory. She was one of the most celebrated black novelists during the Harlem Renaissance, and received several major awards for her writing. She and her husband were also notable members of the Harlem social scene, and she was a friend to most of the prominent Harlem writers of her time. After a public accusation of plagiarism and an equally public divorce, however, Larsen removed herself from the public eye, and was effectively forgotten by both acquaintances and audiences until after her death. But renewed interest in both the Harlem Renaissance and black women writers has brought her back to prominence, and Larsen is again celebrated as a key figure in the African American literary tradition.

Biography
She was born in Chicago in 1891 to a Danish mother, Mary Hanson Walker, and an African-American father, Peter Walker. Her parents separated shortly after her birth and her mother married the white Peter Larson. Larsen grew up in Chicago and attended the public schools there before she was enrolled in Fisk University’s Normal School in 1907, alienating her permanently from her birth family. Between 1912 and 1915, Larsen trained as a nurse in New York and, upon her graduation, went down to Tuskegee Institute in Alabama to work as head nurse at John Andrew Memorial Hospital and Nurse Training School. But while she had come to feel most comfortable in all-black environments, she was still unhappy in the South, and in 1916 she returned to New York. Soon she returned to New York and took a nursing post there. There she met Elmer Imes, a physicist, whom she married in 1919.

Encouraged by writers and artists around her, especially black writer Walter White and white patron Carl Van Vechten, in 1926 she began writing full-time. Her first publications were two articles about Danish games, published in the Brownies’ Book, a children’s magazine. In 1921 Larsen left her nursing position and took a job at the New York Public Library’s 135th Street branch in Harlem and attended library school at Columbia University. She continued at the NYPL until 1926 and furthered her writing skills, writing several pieces of short fiction, which she published, some under the pseudonym Allen Semi (her married name reversed). She was also at work on her first novel, Quicksand. 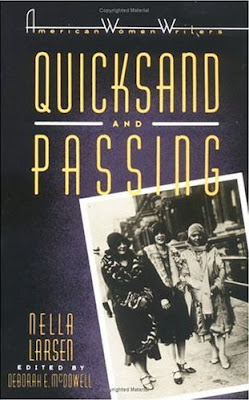 Larsen’s two novels, Quicksand and Passing, were published by the mainstream publisher Alfred A. Knopf in 1928 and 1929. Both novels deal with upper-class, mixed-race black women protagonists, reflecting the world Larsen found herself in, but they go beyond simply painting that world. Instead, they are complicated explorations of the ways in which race, gender, class, and sexuality all constrict the women’s lives to varying degrees. In Quicksand the main character is a biracial Danish and black woman, like Larsen, who finds that she is not entirely at home in either Danish or African American society but who cannot find an alternative. And in Passing, the protagonists are two childhood friends who meet as adults and find that while one has settled into a safe life in the black bourgeoisie, the other has chosen to pass as white. That novel’s tensions rise as the women find themselves drawn to one another, yet jealous of one another’s lives.

Shortly after the publication of Larsen’s second and last novel, she published the story “Sanctuary” which concerns a man who, after shooting someone, seeks refuge in the home of a friend’s mother, not realizing that it is the friend who he has shot and killed. In 1930, Larsen won a Guggenheim Fellowship (the first African-American woman to receive this award) and traveled to Europe to work on her next novel. This was followed by the humiliation of her 1933 divorce, which stemmed from her husband’s alleged affair with a white woman. Newspapers covering the story accused Larsen of being too preoccupied with her writing to be a good wife, and claimed that she had tried to commit suicide over the affair; and while Larsen did not literally kill herself, she did close herself off from all contact with her former life. Spreading a rumor that she was moving to South America, she moved instead to New York’s Lower East Side, where she lived alone and worked quietly as a nurse for the next thirty years. Larsen was found dead in her apartment in 1964.

But despite the obscurity of the end of her life, Larsen’s reputation and writings have been resurrected. Contemporary critics now regard her as one of the most sophisticated and modern novelists to emerge from the Harlem Renaissance, and her two books are regarded as landmark examples of black women’s attempts to explain their complex identities - and the complicated forces circumscribing them - in fiction.

(Above text taken from Prose of the Harlem Renaissance)

Posted by Craig Hickman at 3:15 PM