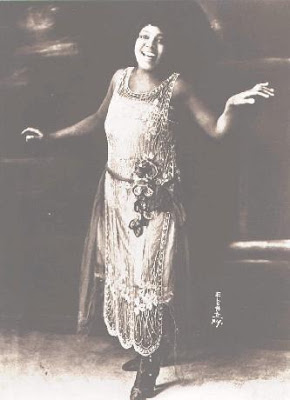 BESSIE SMITH (1894? - 1937) - The eighth child of a poor black family in Chattanooga, Bessie began singing on street corners for pennies when she was less than 10 years old. A local club operator heard her; offered her $8.00 a week to sing at his tavern and so her career began.

But this is not the forum to explore her professional life as a singer and entertainer, although her story makes fascinating reading. What I want to discuss is how her death was exploited for greed and to further a political agenda.

In the years following Bessie Smith’s death there were conflicting accounts of how she actually died. What is known is that after a late night performance somewhere in Mississippi, probably Natchez, Bessie headed for Memphis in a car driven by her boyfriend, Richard Morgan. In 1937 there were no expressways and Route 61 was a typical poorly lit, winding two-lane road. Near the outskirts of Clarksdale, in the early morning hours of that September day, their car, being driven at a high rate of speed, crashed into the back of a truck stopped on the side of the road.

Several rumors began circulating regarding the cause of her death: she was killed upon impact, she was taken to a hotel where she died; she died in an ambulance en route to a hospital, and she was taken to a white hospital that refused to treat her because she was black and so she died as the ambulance tried to locate a black hospital.

Record company executive, John Hammond, had a recording contract with Bessie (more about that later) and was also her producer at the time of her death. Hammond published an article in Downbeat magazine stating, as a fact, that Bessie died because she was refused treatment at a white hospital in Mississippi. He then had her recordings reissued knowing that there would be a demand for them created by her untimely death and the racially tinged circumstances surrounding it.

Years later, as we entered the 1960s, the civil rights movement was taking on more momentum and the entertainment industry was churning out depictions of victimized minorities. Film and TV scriptwriters as well as playwrights like Edward Albee were searching for material for dramas portraying racial discrimination. Albee knew he had hit pay dirt when he came across Hammond’s account of Bessie Smith’s death. It had all the ingredients he was looking for; the unnecessary death of a critically injured black woman caused by the bigotry of heartless white Southerners. 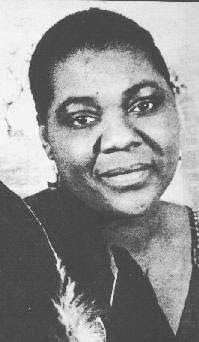 In 1960, Albee’s one act play "The Death of Bessie Smith" premiered in New York. Albee painted Bessie as the ultimate victim trying to survive in the segregated South. In the final scene Bessie’s distraught lover stands in the admissions department of a white hospital begging to have her admitted. A spiteful white nurse, speaking with an exaggerated Southern accent as demanded by the stage director, refuses to admit Bessie because she is a Negro. So Bessie dies and audiences probably left the theater feeling outrage against white Southerners.

Luckily the facts surrounding Bessie Smith’s death were investigated while participants and witnesses were still alive. Here, as Paul Harvey would say, is the rest of the story.

Immediately after Bessie’s car crashed into the back of the truck, another car, coming from the opposite direction, arrived on the scene. The driver was Dr. Hugh Smith, a white physician en route to join friends for an early morning hunting trip. Dr. Smith found Bessie in an extreme state of shock, bleeding profusely, one arm nearly severed and several ribs broken. He dispatched Richard Morgan to get an ambulance while he tried to stem the loss of blood and stabilize her condition.

While Dr. Smith was attending Bessie, another car crashed into the back of his parked car. Dr. Smith could see that the occupants of the wrecked car, a white couple, were slumped over and splattered with blood. But he continued his ministrations to Bessie until he and the ambulance team had gingerly placed her into the ambulance. Then the frantic doctor turned his attention to the injured white couple.

Albee and others wanted the nation to think, that, after being refused treatment at a white hospital, Bessie died while her ambulance raced across the State of Mississippi desperately trying to find a black hospital. But Clarksdale’s black hospital was less than a mile away from the white hospital. And there would have been practically no traffic at that early morning hour so the trip could have been made in a matter of minutes.

But Bessie Smith was never taken to a white hospital. In the segregated South of that time no ambulance driver would have taken a black patient to a white facility. And, according to testimony from the doctor and bystanders, the ambulance headed directly to the black hospital rather than the white one. In all probability, Bessie died from shock and loss of blood before she reached the hospital.

To his credit, John Hammond withdrew his claim that Bessie was refused treatment at a white hospital. He admitted that this was just one of several rumors floating around and he knew nothing about the actual facts surrounding Bessie’s death. Edward Albee knew that Hammond had changed his story but he also realized that the first version would make better theater. Playwrights are entitled to a certain amount of artistic license but Albee shouldn’t have deliberately scripted an untrue version of Bessie’s death.

The recording contract that Hammond negotiated with Bessie was, to put it mildly, unusual. Obviously, Bessie Smith was not well versed in financial transactions and was happy to be signed to a record company. But her strange contract contained a "no royalties" clause. Bessie was paid $30 for each recording she made and all the royalties were paid to John Hammond. It is estimated that Hammond earned over $60,000 on the sale of Bessie Smith’s recordings. In today’s dollars this amount would be about five times as great.

Bessie Smith is still an icon for feminists because of her struggle against a patriarchal and discriminatory society. Lesbian groups consider Bessie a heroine because of the bisexuality that she made no attempt to hide. These organizations continue to mythologize Bessie and spread Albee’s version of her death.

But those who have taken time to research the matter have repudiated Edward Albee. Chris Albertson’s fine biography "Bessie" is a factual account of the singer’s life and death. Also, in Frank Kofsky series Black Music, White Business the truth about Bessie is covered in a section called "Why let a little thing like death interfere with exploitation?"

This is just one of many incidents during the last few decades where the usual scapegoats, white Southerners, were falsely maligned in order to further a political agenda. The unethical exploitation of both Bessie Smith and white Southerners proved to be highly profitable for John Hammond and provided Edward Albee with a powerful political stratagem.

"The Death of Bessie Smith" was making headlines at a time when Congress was discussing legislation to combat discrimination. I maintain that Albee’s play as well as other similar politicized dramatizations not only influenced the political climate of the early 1960s but also helped shape legislators’ votes. It was in this political environment that Congress passed the far-reaching Civil Rights Act of 1964. In this bill Congress focussed on short-term benefits, ignored long-range consequences, and included sections that applied only to Southern states.

In the 1970s, rock singer Janis Joplin was shocked to learn that Bessie Smith was buried in an unmarked grave. A campaign to raise money for a proper memorial was undertaken and requests for donations were sent to all those who had been associated with this greatest of all blues singers. John Hammond contributed $50.

(Above text taken from Lew Rockwell.com)

Bessie Smith earned the title of "Empress of the Blues" by virtue of her forceful vocal delivery and command of the genre. Her singing displayed a soulfully phrased, boldly delivered and nearly definitive grasp of the blues. In addition, she was an all-around entertainer who danced, acted and performed comedy routines with her touring company. She was the highest-paid black performer of her day and arguably reached a level of success greater than that of any African-American entertainer before her.

Smith was born in Chattanooga, Tennessee, in 1894. Like many of her generation, she dreamed of escaping a life of poverty by way of show business. As a teenager she joined a traveling minstrel show, the Moss Stokes Company. Her brother Clarence was a comedian with the troupe, and Smith befriended another member, Gertrude "Ma" Rainey (a.k.a. the "Mother of the Blues"), who served as something of a blues mentor. After a decade's seasoning on the stage, Smith was signed to Columbia Records in 1923. Her first recording - "Down Hearted Blues" b/w "Gulf Coast Blues" - sold an estimated 800,000 copies, firmly establishing her as a major figure in the black record market. Smith sang raw, uncut country blues inspired by life in the South, in which everyday experiences were related in plainspoken language - not unlike the rap music that would emerge more than half a century later. She was ahead of her time in another sense as well. In the words of biographer Chris Albertson, "Bessie had a wonderful way of turning adversity into triumph, and many of her songs are the tales of liberated women."

Some of her better-known sides from the Twenties include "Backwater Blues," "Taint Nobody's Bizness If I Do," "St. Louis Blues" (recorded with Louis Armstrong), and "Nobody Knows You When You're Down and Out." The Depression dealt her career a blow, but Smith changed with the times by adapting a more up-to-date look and revised repertoire that incorporated Tin Pan Alley tunes like "Smoke Gets in Your Eyes." On the verge of the Swing Era, Smith died from injuries sustained in an automobile accident outside Clarksdale, Mississippi, in September 1937. She left behind a rich, influential legacy of 160 recordings cut between 1923 and 1933. Some of the great vocal divas who owe a debt to Smith include Billie Holiday, Dinah Washington, Sarah Vaughan, Aretha Franklin and Janis Joplin. In Joplin's own words of tribute, "She showed me the air and taught me how to fill it."
(Above text taken from Rock and Roll Hall of Fame)

Interesting post, I only had a dim perception of who Bessie Smith was before reading this. (NPR doesn't play nearly enough of her!) Thanks for a good read! (btw... lovely blog)

Thanks for the shout out, nonsequitur.

And thanks for the visit.