The Robe of Identity 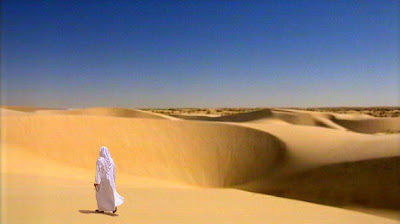 “IDENTITY would seem to be the garment with which one covers the nakedness of the self: in which case it is best that the garment be loose, a little like the robes of the desert, through which one’s nakedness can always be felt and sometimes discerned. This trust in one’s nakedness is all that gives one the power to change robes.”

Baldwin challenges the underlying assumptions in such films as In the Heat of the Night, Guess Who’s Coming to Dinner, and The Exorcist, offering us a vision of America’s self-delusions and deceptions. Here are our loves and hates, biases and cruelties, fears and ignorance reflected by the films that have entertained us and shaped our consciousness. And here, too, is the stunning prose of a writer whose passion never diminished his struggle for equality, justice, and social change.

From The Birth of a Nation to The Exorcist—one of America’s most important writers turns his critical eye to American film.

(Posted first in January 2007 in observance of film awards season.)

Posted by Craig Hickman at 8:26 PM

Wow, I love that quote. Really says it so well. Thanks.

One of my all-time favorite writers/thinkers.