The World's Fastest Man is Homosexual! 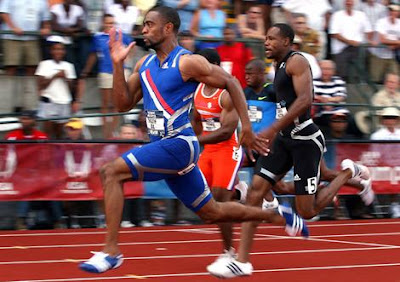 RIGHT BEFORE Tyson Gay ran the fastest race a human has ever run the Olympic trials yesterday, the commentators talked about how Gay looked up to the world's first Black Olympic champion in the 100 meters.

I wanted to be Jesse Owens, too.

Gay, perfect form just like his idol, ran a remarkable race. I've never seen anything like it. 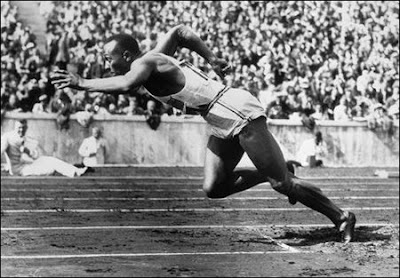 Enter OneNewsNow.com, a biased news site funded by the AFA, or American Family Association, a far right-wing (and James Dobson-friendly) organization whose own web site decries the "homosexual agenda."

As some discovered over the weekend and this morning, the OneNewsNow.com site has a filter set up on its news results that automatically changes the word "gay" to "homosexual." I think it's an odd substitution, but I'm sure they've done some kind of research that shows that "gay" has a more positive connotation than the more literal "homosexual."

How did this attempt at framing backfire on OneNewsNow.com and the AFA? The answer comes from track-and-field.

From the Boston Globe:

When Tyson Gay crossed the finish line in the men's 100 meters yesterday, the crowd at Hayward Field gasped. The clock displayed 9.68 seconds. Everyone at the US Olympic track and field trials knew what that meant. Gay ran the fastest 100 ever, regardless of conditions....

Engage homosexual filter! To people visiting OneNewsNow.com, this was the headline:

I refuse to click on a website that has anything to do with James Dobson, so I have no idea if these headlines have changed or not, but I find this fricking hilarious, even if kind of sad.

Posted by Craig Hickman at 2:52 PM

Those people are searching for gays around every corner...and damned if they aren't determined to find one!

All I can do is shake my head at the continued stupidity of some people.

When we saw this on the web yesterday, it made us laugh (at those fools), then the anger set in. JD, a name I do not like to invoke, is not just part of the group cited in this article but he is part of the IRD, I commented on, a few weeks ago.
::

Did you see the you tube in the comments section for this post on Monday? The first one in particular was very funny. I was going to email it to J and you but could not find a way to do it. Check it out, if you have not already.

Yup, frickin' hilarious and sad at the same time. Next, some frickin' dingbat will be suggesting Tyson should change his name.