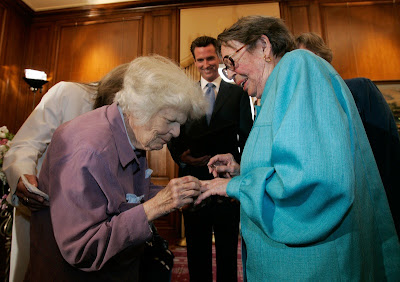 Bless them! Absolutely adorable picture of the mothers of the Daughters of Bilitis.
They have weathered more storms and stuck together than the majority of straight couples.....It is a shame they had to wait until they were in their eighties, but better late than never

For those who don't know, these are the Daughters of Bilitis.

i can't imagine that those who rail against these women marrying could actually look them in their eyes and still protest. it's inconceivable to me. i am so happy about california's decision.

God Bless them both! I can not even imagine what these 2 ladies have seen and lived in their lifetime. That it has taken them this long to be able to legally recognize their union is something else.

I am SO pleased for them and all the toher couples who were married. Love is a beautiful thing.

I saw this on the television, and I cried tears of joy for them. Love conquers all.