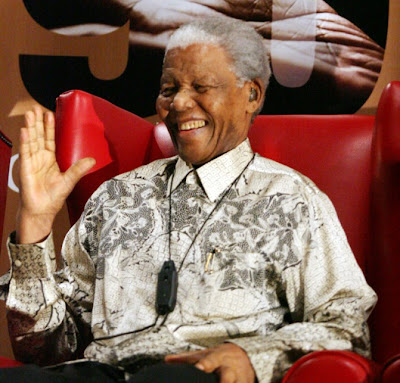 Proceeds from the show will go to to 46664, the AIDS charity named for the number Mandela wore while imprisoned for opposing South Africa's apartheid regime.

Mandela was released from prison in 1990 after 27 years. He retired from politics in 1999.

Nelson Mandela has the most exquisitely beautiful smile! Twenty seven years in prison could not take that away from him.... incredible, yes?


I think I am going to start another waiting prayer book.
I used to have a book, "The Waiting Prayer", by Catherine Marshall. A fellow camp councilor from the Baptist Youth Camp ,in China Me, sent it to me, with a lovely note on an egg shaped cutout taped to the inside jacket.

It read something like this:
Dear M.....
I am glad our paths crossed at your first, Baptist Winter Camp. You have incredible gifts M....,I hope you continue to work with Jr and Sr High youth, God has blessed you with a lot to share.
In Christ, ....

I read the book and found that throughout my remaining college years I would write goals or prayer on slips of paper and stick them in the book, for another year.
Interestingly, year after year, the one or two prayers I would tuck inside the pages of Catherine Marshall, always came to pass.
It has taken me through life participating with the Paraclete - until the yr 2003.
I lost five years and now, I realize that God had never stopped blessing me and my family.
Not with trips, and adventures, not the kind I was used to anyway, but an adventure that I have lived to talk about.

Craig, I am not sure why I am sharing this with you but somehow, I feel nudged to do so. I learned a long time ago to trust the Spirit. The time came, when the Holy Spirit was all that I could really trust.
Now I understand why.
Is not the Paraclete, the "one who walks with us", on our behalf, our interpreter to God, ?
Jesus, is our shepherd,we know because it is written in one of my favorite Psalms, the twenty third.

We have some things to do today so I had better get off the computer and take a shower, at least that is only a half hour event now :-)

We have to go to church and collect a few more signatures for Real ID. The Civil Liberties office just mailed us some more printed material, some nice card stock, info posters to hand out to folks.
::

May he have many more. His spirit is still strong and he seems filled w/joy, strength and courage. A man I truly admire.