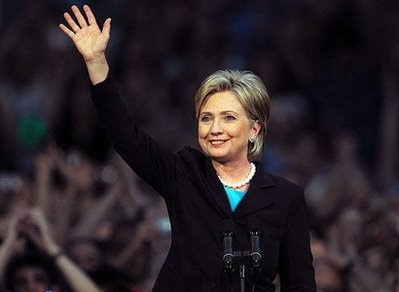 I GIVE HER CREDIT for her speech. She said almost all the right things. (If I nitpick, I believe some use of the the word "fairly" near the word "victory" would have made it perfect, but at least she didn't act like she had won on a technicality.)

And she delivered it well.

Sounds like Barack's speech writers wrote some of that speech.

She didn't need to mention John McCain. It wasn't about him.

Now, let's see what she actually does to try to get Barack elected. Actions speak louder.

I haven't forgiven her for her campaign, but I can admit that it's time to look forward and she did that with her speech.

But this was the first step toward unity and I'll always give the devil his due.

Andrew has a more devastating perspective. It's worth a look-see.

It's also time to turn the page.

Posted by Craig Hickman at 2:20 PM

Can you please explain what was "devastating" about Sullivan's comment?

Her two biggest problems: She first married a man who was her political superior and was then defeated by one. She is a very talented politician but it was her fate to find her career hemmed in by two even more talented ones: Bill and Barack. She made up for it all with enormous hard work, diligence and ruthlessness. At any other moment, she would have won. But this is history and politics at the highest level. You cannot defeat such a moment if you are a Salieri. And she had to deal with two Mozarts.

These words speak for themselves, no?