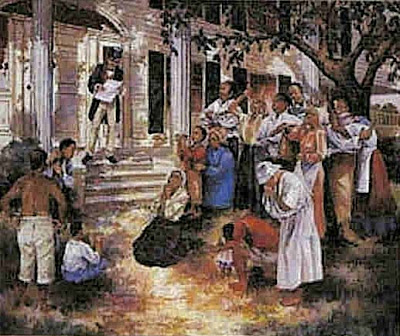 JUNETEENTH is the oldest known celebration commemorating the ending of slavery in the United States. Dating back to 1865, it was on June 19th that the Union soldiers, led by Major General Gordon Granger, landed at Galveston, Texas with news that the war had ended and that the enslaved were now free. Note that this was two and a half years after President Lincoln’s Emancipation Proclamation - which had become official January 1, 1863. The Emancipation 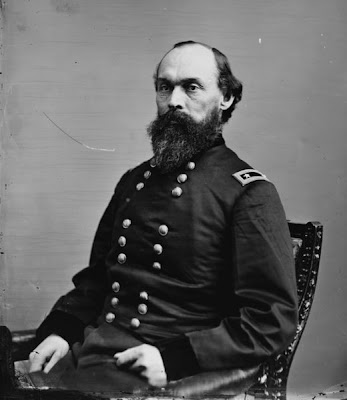 Proclamation had little impact on the Texans due to the minimal number of Union troops to enforce the new Executive order. However, with the surrender of General Lee in April of 1865, and the arrival of General Granger’s regiment, the forces were finally strong enough to influence and overcome the resistance.

Later attempts to explain this two and a half year delay in the receipt of this important news have yielded several versions that have been handed down through the years. Often told is the story of a messenger who was murdered on his way to Texas with the news of freedom. Another, is that the news was deliberately withheld by the enslavers to maintain the labor force on the plantations. And still another, is that federal troops actually waited for the slave owners to reap the benefits of one last cotton harvest before going to Texas to enforce the Emancipation Proclamation. All or none of them could be true. For whatever the reason, conditions in Texas remained status quo well beyond what was statutory.

Today Juneteenth commemorates African American freedom and emphasizes education and achievement. It is a day, a week, and in some areas a month marked with celebrations, guest speakers, picnics and family gatherings. It is a time for reflection and rejoicing. It is a time for assessment, self-improvement and for planning the future. Its growing popularity signifies a level of maturity and dignity in America long over due. In cities across the country, people of all races, nationalities and religions are joining hands to truthfully acknowledge a period in our history that shaped and continues to influence our society today. Sensitized to the conditions and experiences of others, only then can we make significant and lasting improvements in our society.

"Happy Juneteenth Day"
This IS at the heart of our civil liberties, personal freedoms and privacy."Those who would give up Essential Liberty to purchase a little Temporary Safety, deserve neither Liberty nor Safety." - Benjamin Franklin

This IS at the heart of our civil liberties, personal freedoms and privacy.

On the June 10th primary, we collected signitures and still need several thousand to reach our goal of fifty five thousand signitures needed to veto this and bring it to the people to vote on in Nov.but throughout

We have until July 10 to collect and validate signitures in order to Veto the Real ID it is important to know that our civil liberites is being threatened by way of the Read ID , [LD 2309]
Our Governor caved after the legislature voted, almost unanimously last year, to NOT ALLOW Real ID in this state.

This is not a partisan issue. Concerned citizens from the left of Left to the right of Right, to sportsmen and religious communities to the elderly and teachers in various schools all understand their civil liberties, the fate of our Republic and the foundation of our democracy are at the center of this issue.

As Matt Dunlap, our Maine Secretary of State said in his testimony before the Transporation Commmittee, in this bill [LD 2309]; "If I sound alarmist, I mean to be....." This is not a man who says such things without great thought and concern.

Please contact us to sign on to help even if it's only for an hour or half a day; anything you do to help gets us closer to saying NO to yet another nail in our gasping democracy.

Please also write letters to the editor, to your legislators [either thanking or admonitioning depending on whether they voted for or against this bill], to the Governor, who caved after the legislature voted, almost unanimously last year, to NOT ALLOW Real ID in this state.

We will have more information as things move along.