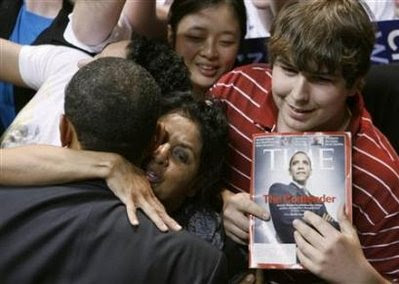 But he ran against Mrs. Nixon, Mrs. Nixon's victimhood, President Clinton, and their 15 years of campaign history in the Keystone state; the Pennsylvania Democratic party machine led by Gov. Ed Rendell; Philadelphia mayor Michael Nutter; Pittsburgh mayor Luke Ravenstahl ; John McCain, ABC, Fox, CNN and MSNBC; and his own foot-in-mouth bitter comments and lackluster performance at that hit job folks still want to call a debate. Am I missing anything?

And yet, he only lost the Pennsylvania primary by 9 points after being behind 26 points in polls right after the Reverend Wright videos looped nonstop on cable news and the Internet.

One doesn't need to be a politician to spin that as a a big step toward victory in the war. Because she didn't score a huge victory in a state tailor-made for one, Mrs. Nixon will have to win 71% of the popular vote in the remaining states to catch up to Obama in pledged delegates.

I'm not afraid of what happens from here on out. But it's going to get ugly. Really ugly. And the intent will be to destroy Obama's humanity to bring him down.

Mrs. Nixon is going to keep running her fearmongering Kitchen ad which features an image of Osama bin Laden. The first time a Democratic candidate has used that image in any election since 9/11. And ad that also, ironically, suggests that the Black man—the one we should be afraid of, the one they've cast as a Black radical Islamofascist Manchurian Candidate terrorist—is a pansy wimp. A contortion worthy of a circus act.

In her victory speech, Mrs. Nixon co-opted many of Obama's "empty words" and used them as her own. And she once again shamelessly promoted her woman-ness as the reason she must, must, must be president.

Obama lost the battle. But he will win the war.

We will win the war. We have to fight to win, and we will not give in.

If the Republicans run that ad and Hillary doesn't denounce it and have that long over due conversation about race, the super delegates need to take over.

I tried to add you to my feeds - there wasn't a link to subscribe.

The MSM is running that ad for the Republican party. It was on every 15 minutes today. And the new Willie Horton ad ran twice on MSNBC. I don't watch CNN and Fox, but I bet they both looped today on those networks without end.

ms.martin there's a button way down at the bottom of the sidebar.

I'm with you, Craig.

I give you points for watching Mrs. Nixon...that's something I can no longer do.