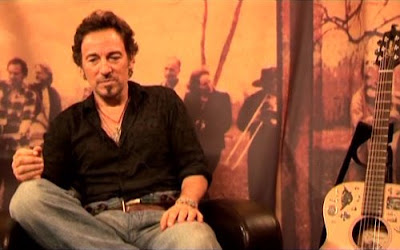 CELEBRITY endorsements don't mean a whole lot, as far as I'm concerned anyway. But since I have enjoyed Bruce Springsteen's music and spirit for so long, I'll give him some ink. Here's the meat of his endorsement:

At the moment, critics have tried to diminish Senator Obama through the exaggeration of certain of his comments and relationships. While these matters are worthy of some discussion, they have been ripped out of the context and fabric of the man's life and vision, so well described in his excellent book, Dreams of My Father, often in order to distract us from discussing the real issues: war and peace, the fight for economic and racial justice, reaffirming our Constitution, and the protection and enhancement of our environment.

After the terrible damage done over the past eight years, a great American reclamation project needs to be undertaken. I believe that Senator Obama is the best candidate to lead that project and to lead us into the 21st Century with a renewed sense of moral purpose and of ourselves as Americans.

I'd be hard pressed to find anyone who believes that the man who made "Born In The U.S.A.", the nation's second national anthem, and the man whose most famous lyrics give voice to small-town America, to be anything other than a "real American."

Perhaps this endorsement might matter in the upcoming Pennsylvania primary on April 22 after all. The Boss does have great songs entitled "Badlands" and "Streets of Philadelphia" doesn't he?