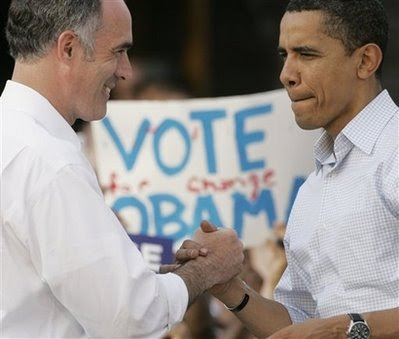 I WROTE about the importance of Sen. Bob Casey's endorsement soon after it happened. I suggested it could be the most important endorsement of this primary cycle. I'm not alone:

Casey has filled an unexpectedly vital role for Obama, testifying to his character and message in a state that can take a dim view of change, at a time when gaffes and controversies threatened to carve an even larger gulf between the Illinois senator and Pennsylvania voters.

“I don’t think we have had a better endorsement in an individual state than Bob Casey,” said Robert Gibbs, a top Obama adviser. “He gave the campaign a tremendous amount of credibility. He helped in areas that have been tough.”

In making one of his earliest calls to Casey after the “bitter” comments became public, Obama first wanted to explain what he meant, but also to share that he knew they were poorly worded, Gibbs said.
Obama apparently didn’t need to worry.

“When I make a commitment to someone,” Casey said, “it is for the smooth road and the rocky road.”

Sen. Casey has taken on Gov. Ed Rendell, Sen. Nixon's biggest supporter, on Meet the Press and Face the Nation. Has defended Sen. Obama's character and empathy in the wake of the manufactured "Bittergate" on the Clinton News Network (CNN). Starred, alone, in an advertisement set in Scranton, his hometown and Sen. Nixon stronghold, praising Obama's vision for America.

If Obama keeps it close in Pennsylvania, or better yet, pulls off the upset by a few points, Casey's support will be the biggest key to a victory, perceived or outright, in the Keystone state.

You can see how much these men love each other. And it's a beautiful picture. 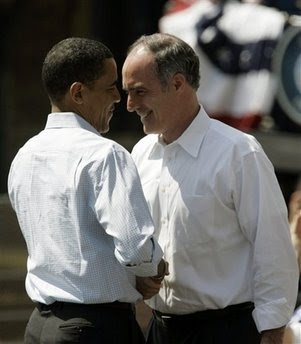 Posted by Craig Hickman at 9:04 AM