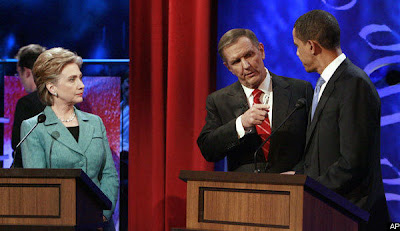 SOME are calling it a hit job. Others are calling it a lynching. Many more are calling it the worst debate ever. Many of the 10.7 million viewers were livid with the questions the moderators asked for the first hour of the debacle and are asking for their heads on platters. Many of those have pledged to boycott ABC, its affiliates and advertisers. Pennsylvania Democrats are furious that a 4-against-1 assault on Barack Obama (the fourth party was McCain by proxy) didn't allow them to hear a discussion of the issues that mean the most to them. Some are suggesting a major backlash against Hillary Clinton's ruthless Nixonian tactics resulting in an upset next Tuesday. We'll see.

Posted by Craig Hickman at 1:10 PM