On To The Smithsonian 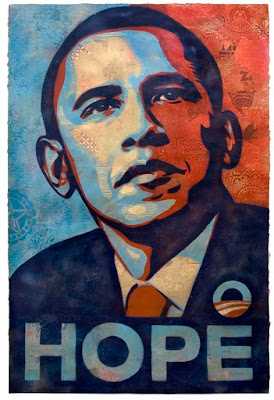 WASHINGTON — Even before he takes office, President-elect Barack Obama's image will become part of the permanent collection at the National Portrait Gallery, the museum announced Wednesday.

The gallery acquired the iconic red, white and blue collage by Los Angeles street artist Shepard Fairey, depicting Obama with the word "Hope." The image _ later modified with the messages of "Change" and "Vote" for the Obama campaign _ became one of the most memorable images from the election. The curators at the Smithsonian Institution museum plan to hang it by Inauguration Day.

"What I think is so fascinating is the ubiquitous nature," said Carolyn Carr, deputy director of the Gallery. "When people think of a portrait of Obama, they think of this image."

Gallery officials would not reveal how much they paid Fairey for the five-foot tall, mixed-media stenciled collage. Art collectors Heather and Tony Podesta of Washington donated money for the Smithsonian to purchase the work.

Typically, the gallery acquires official portraits of presidents as they are leaving office, and an official Obama portrait will be added later. A portrait of President George W. Bush was unveiled at the gallery in December.

Fairey's collage appeared on thousands of stickers, posters and T-shirts across the country. Time magazine recently commissioned Fairey to create a similar image of Obama for its Person of the Year cover.

Obama's Presidential Inaugural Committee unveiled another print Wednesday created by Fairey to be sold on the committee's Web site. Most will sell for $100, but 1,000 prints signed by the artist are priced at $500. Proceeds will help fund official inaugural events.
Fairey's works are also in the collections of the museum in New York, the Los Angeles County Museum of Art and the Victoria and Albert Museum in London.

I've got the image blown up on poster board displayed from my front door and two of my windows. I'm hard pressed to find anyone who doesn't like the image, even if they aren't (yet) an Obama supporter.